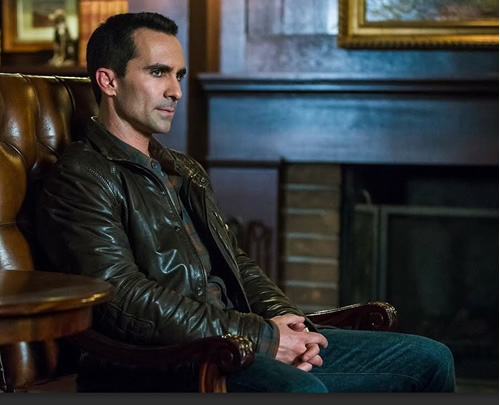 Synopsis:  Norma reveals her possession; Romero fights to regain his title; Dylan and Norman drop the Caleb bomb on Norma

Summary with SPOILERS: Norman is convinced that he told Norma about Caleb being in town although Dylan learns that she knows nothing about her brother’s return.  Dylan promises Norman that he is going to tell their mother about Caleb’s visit when the time is right.

While burning off the frustration of his situation via an axe and a tree, Caleb is visited by neighbor Chuck Hogan.  They take turns symbolically pissing on their territory before Hogan offers Caleb a job to fill a post-DEA vacancy for a driver. He offers Caleb money and boar jerky.  Caleb replies that he won’t be staying in town long and that he’s turning over a new leaf. Hogan asks for a definite reply to his offer by the end of the week.

Norma is tailgated and forced off the road by one of Bob Paris’ elitist thugs. He strongly encourages her to return what belongs to them.  When she threatens to call Sheriff Romero, he tells her that Romero can’t save her nor can he even save himself.

Norma accepts an offer of a ride (and a stop at the diner) with Professor Finnigan while she waits at the bus stop sans banged up Mercedes. She comments how she has never met someone who talks so openly and decides that he might be able to help her with her shit after all. When asked, he admits that he is very attracted to her but can handle himself in a professional relationship….if she can.

Sheriff Romero learns from a local that Clay Dufont was “bird watching” at the lake prior to the discovery of Lindsey’s body – on a cloudy day with no binoculars and no camera.  Romero interrupts Bob Paris’ lunch with smarmy, would-be sheriff Marcus Young. Once alone, Romero names Dufont as a cover-up accomplice.  Paris point-blank tells Romero – with a tinge of threatening undertones – to get the flash drive back from Norma Bates.  He adds that he was left no choice but to bring Marcus Young into town to take Romero’s job from him. Romero replies that if he’s forced into a corner, there won’t be room for the both of them.  No sooner does Romero come across Clay Dufont behind the wheel of his curbside car with a bullet in his forehead.

While investigating the faulty lights in the barn, Gunner discovers the flash drive that Dylan stashed away in the wall timer.  He calls Dylan to tell him about his discovery, including the information he has accessed by cracking the encryption – a financial ledger splitting $15 million of drug money between the most influential names in town.  Dylan plays dumb and runs to Norma, declaring that they need to turn the flash drive over to Romero.  Despite telling her how important it is for him to finally have a family, Norma begs Dylan to let her use the flash drive as leverage because she has no backup plan to take care of Norman once the motel succumbs to the bypass. Norma visits Romero at his home and tells him that she has the flash drive but will only return it to Paris if he will make a deal.  When Romero shoots down her plan, she recalls the pain White Pine Bay has caused her and how it’s finally her turn to play ball with the big boys.  Struggling with the front door knob during her passionate exit, Romero holds her with an intimate distance to calm her and agrees to arrange a meeting with Paris. Bob Paris smugly agrees to all of Norma’s nervously delivered terms in exchange for the flash drive: an exit off the bypass that leads directly to Bates Motel along with two advertisement billboards on either side of the new road.

Norman offers to support Dylan in his decision to tell Norma about Caleb.  He hates himself for trying to destroy Dylan’s newfound closeness with Norma and trusts Dylan judgment. Norman fights off misty emotions as he declares that he is no longer Norma’s little boy.  Norma is forced to sit at the kitchen table and listen to her sons announce Caleb’s presence in town and defend his need to apologize to Norma for all that he’s done.  When Norman adds, “You have to understand – it’s his father,” Norma slowly leaves the kitchen and heads upstairs.  She maniacally packs her things, dumping clothing and toiletries into her suitcases, despite her sons’ pleas for her to stop.  Dylan attempts to hold Norman back as their mother bolts out of the house and down to her car.  Clearly enraged and wounded by the bomb that has been dropped on her, she shouts to Norman, “Your brother will look after you!” and burns rubber.

Opinion:  Norman’s delicate state seems more of an inconvenient distraction to Norma than her driving survival instinct. She appears more focused on her own continued existence as seen through her discussion with Professor Finnigan, her bartering with Bob Paris, her fleeing from her sons… We learn about Romero’s troubled upbringing during his tête-à-tête with Paris; a revelation that should (hopefully) be revisited. Caleb might not be as remorseful as he seems as we catch a glimpse at his tearful pining for Norma.  Emma cryptically tells Norman that Dylan is able to forgive Caleb because we all have no choice but to whitewash the sins of our parents. (Might we learn more about the death of young Mrs. Decody?)  And Dylan’s neighbor? What’s with the boar jerky??

“Keeping the Creepy” Score: 9 – Norma rifles through Norma’s closet to find the white and blue dress he loves her to wear – the dress he was convinced she had been wearing earlier that day. He inhales it, hugs it, drapes it against his body as if he were wearing it….and then stuffs it under his mattress when Mother calls him to dinner.  Yee-ha!!  Oh, and we learn during Emma’s welcome speech to a new guest that the Wi-Fi password at the Bates Motel is “MOTHER. All caps.”  It’s the little things, I tell ya.