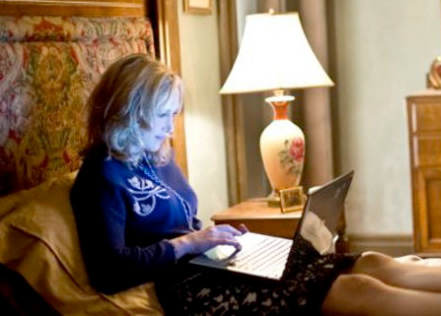 Summary with SPOILERS: Romero travels every avenue possible to learn more about the death of Annika Johnson. He discovers that the car she drove to the Bates Motel in her dying state was registered to Lindsey, the gal who turned up facedown in the marsh.  He also learns from one of their “peers” that Annika and Lindsey had a threesome with Arcanum Club president Bob Paris.  Romero once again visits Paris at the club and is once again shot down for snooping.  Paris incriminates himself by asking Romero if anything was found on Annika’s dead body, prompting Romero to search Room 4 of the Bates Motel.  Norma keeps word of the flash drive away from Romero but eventually tells Dylan when she is unable to crack the password code.  When Dylan confronts two well dressed, gun-wielding men searching the motel lobby for something that “belongs” to them, he insists to Norma that he hide the flash drive somewhere at his farm.

Norma has another encounter with Psych 101 Professor Finnigan when he catches her looking at computer code books in library. After passing it off as an inquisitive mother wanting to know more about her son’s computer habits, Finnigan asks her to coffee.  She emotionally details her recent separation from Norman, revealing that she doesn’t trust him anymore.  Finnigan validates that honesty is an odd commodity these days.

Dylan scolds Caleb for going into town for supplies with Gunner pointing out that Norma could have seen him.  While arguing with Dylan about his prolonged visit, Caleb falls through the frame and injures his hand. Dylan offers to stitch him up after learning that Caleb can’t go to the hospital due to an outstanding warrant.  Caleb does not tell Dylan that he saw Norma (unnoticed) during his errand with Gunner but goes on to describe their past with compassion, desperation and regret. Caleb reveals that when Norma told him that their bond needed to be severed, he raped her, causing her to become pregnant with Dylan. He wants to apologize to her even though he doesn’t expect her to forgive him.

While telling Norma about his conversations with Annika, Norman asks her, “Do you still like me?” Norman seems convinced of Norma’s affections but tests her devotion by publicly making out with Emma during a homeschooling session.  Norma checkmates his actions by warning him that having sex with Emma might kill her. During a fireside snog in an abandoned log cabin in the woods, Norman succumbs to Norma’s warning, sending Emma off in disgust. Norman’s distance from Norma is confirmed when he hears Norma and Dylan whispering on several occasions.  He confronts Dylan in the front hall of the house and is dismissed in his paranoia.  When Norman follows Dylan back to the farm, he discovers that his brother has been “harboring” their “mother’s rapist”.  When Norman accuses Dylan and Norma of keeping Caleb’s visit from him, Dylan replies that they have instead been talking about their concerns over Norman’s state of mind. Dylan begs Norman to not tell Norma about Caleb’s presence, which Norman translates into the perfect revenge for his brother’s newly tight relationship with their mother.

Opinion: Norma and Dylan seemed to have developed quite the bond between seasons with Dylan taking on the role as protector of both his mother and brother.  While he hardly seems strong enough to handle all job descriptions, his new assignments clearly disrupt Norman’s control over his life with Norma.  Norman’s maturity takes a few steps backwards and we see the schitzy, wide-eyed boy return.  The obligatory assumption that he had something to do with Annika’s murder is thankfully short-lived, as we know he was diving for delusions when she showed up at the motel near death. Norma’s frantic searches for the password to the flash drive are hysterical; from her entries of “Annika”, “Johnson” and “sexcrazed” to her profiling of the Asian cafe dweller and his presumed ability to help her crack the code.  Caleb’s torn dedication to both parents tugs at the unconventional heartstrings. Caleb’s tells a believable – albeit incestuously creepy – story.  Hugs and compliments from both mom and pop are visibly tearing him in two.

“Keeping the Creepy” Score: 1 – There’s no apparent creepiness except for unavoidable sympathy for Caleb. He raped his sister. But she was his world. But…eww.