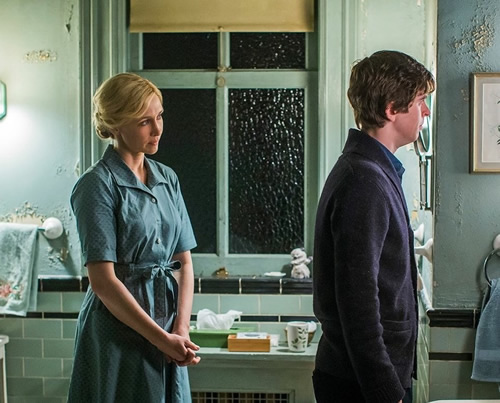 Summary with SPOILERS: Caleb stays on to help Dylan build the new greenhouse and insists on paying for an upgrade. Emma drops off a VW Beetle’s worth of hemp plants to the cabin after they were mistakenly delivered to the motel.  Emma introduces herself to Caleb and when she learns that he is Norma’s brother, Dylan asks her to not tell either Norma or Norman about his visit.  Dylan’s denial of Caleb’s efforts starts to weaken as his needy glances trump his tough words.

Norma’s first week of Business Marketing hits a bump when she sits in on the wrong class and unintentionally insults the Psych 101 instructor, refusing to give up her seat. He apologizes to her in the parking lot the next day for embarrassing her to which Norma replies, “We’re all a dick sometimes.”  He lets her in on the Secret Club of the Damaged and invites her to talk to him about her apparent crappy upbringing.  She tosses his business card out the car window after he walks away but changes her mind and retrieves it.

Romero calls Norma to the morgue to identify the corpse from the lake.  When she tells Norman back at the house that it was not Annika, she adds the whole dead girl/missing girl mess is not their problem.  Romero meets with a bigwig at the Arcanum Club, tells him about the dead woman, and questions if any of the professional ladies might be missing. Romero is reminded that elections are coming up soon and that the DEA shutting down the town’s livelihood is a lot worse than some highfalutin sex parties. Romero visits the Bates home to ask Norman a few questions and Norman cooperates despite Norma’s objections.  After the recall of conversations with Annika, Romero observes that women seem to trust Norman to which Norman replies, “Maybe from spending so many years so close to my mother.” Norman leans back on the couch with a man-of-the-house superiority about him but crumbles when shown the coroner’s photo of the unidentified woman. Just as the corpse is identified as a $100,000-a-weekend call girl, Romero is visited in his office by a Missouri lawman named Marcus Young who plans on running for sheriff.  He compares Romero to a football coach who is finally having a losing season after years of glory. When Romero tells him to take a hike, each of them appears equally confident in their future roles.

Norman attacks Norma for telling Romero that he was the last one to see Annika. He tells her that he is sick of being the one who is assumed to have done something wrong.  He is strong and mature in his scolding of Norma but loses his stable ground when he talks to Emma down at the motel office about his mother’s suspicion and micromanagement. Emma tries to calm Norman by confirming that Norma can be very controlling but he turns plum with rage from the scrutiny and mistrust.  He brings his wrath back up to the house and demands that Norma make up her mind about whether or not Norman is a killer as he lifts and slams his bed repeatedly. Norma remains calm yet terrified, knowing that much of what Norman says is true.  As Norman attempts to calm himself in the bathroom, he catches the reflection of his imaginary Norma in the mirror.  Unphased by her presence, he has a conversation with her about the blurry details of his night with Annika.  Imaginary Norma reminds Norman about his recollection of things while held prisoner in the cold, wet box to which Norman points out that Norma confessed to killing Miss Watson.  Norma concurs yet still suggests that he submerge himself in the tub to remember how he killed Annika. Norman does as he is told and predictable memories flash in his mind before he becomes unconscious.  Norma, who returns with hopes of talking things over, rescues him. After tucking him in, she heads down to close the motel office.  As she crouches behind the desk, crying in the dark about her circumstance, a car pulls into the lot.  Annika emerges and collapses on the ground in front of Norma, with a bleeding gut and a “gift” that she presses into Norma’s fist.  She tells Norma to do something important with it, to use it for her and Norman, before she dies in Norma’s arms.  Norma rushes to the office and calls 911 as she opens her hand to reveal a bloodstained flash drive.

Opinion: Aside from her snarky classroom behavior, Norma continues to show an introspective side, somewhat taking responsibility for her Secret Club of the Damaged membership. Mr. Psych 101 is forward yet emotionally meek, which could get interesting, especially with Norma’s desire “to feel normal right now”.  Not too sure what Romero has stewing to combat the threats but he seems rather confident…I sure hope it’s spicy.  Norman’s fury is maturing as he becomes more aware of his mind.  His distance from Norma almost seems too abrupt, though.  Weren’t they spooning just a few days ago?

“Keeping the Creepy” Score:  4:  All points awarded to Imaginary Norma for partially undressing Norman to prepare him for his bath.