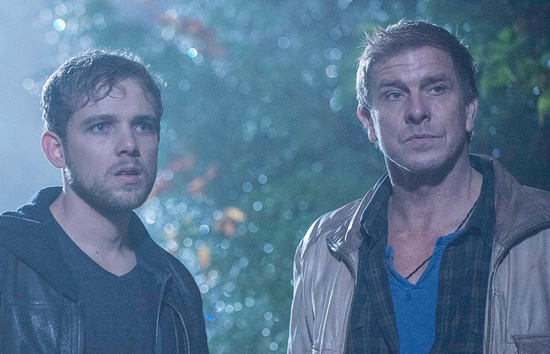 Summary with SPOILERS: Caleb has settled in at Dylan’s cabin, blurring the lines of father, farmer and foreman. When Gunner’s dog Max is attacked by another dog, Caleb shoots the trespassing mutt and says goodnight to all, revealing a cold-blooded angle to his personality.  When the dead dog’s owner, neighbor Chuck Hogan, comes by asking questions, Caleb marks his territory.  Chuck is ordered back to his side of the hill but not before he could point out how there are lots of opportunities in the crops they are planting.  You know….crops of tomatoes, corn and green beans.  Caleb drags Dylan to Chuck’s cabin to return the favor of rattling cages.  They discover that the heavily armed Hogan Family includes a wife, a newborn, no dog and strong opinions about the “rules” of coexisting.  When Chuck compares Dylan and Caleb to George and Lenny from “Of Mice & Men”, Caleb adds “boundaries” to the lists of things they will share (in the absence of cups of sugar).

Room 4 guest Anikka has yet to be seen although her car remains parked outside her motel room. Norma is easily unhinged and questions Norman who denies seeing her the night before.  When Emma innocently tells Norma that Norman was Anikka’s flesh-and-blood GPS, Norman defends his lie by noting that Norma would have been angry to learn he drove without his license.  Norma forces Norman to show her last night’s destination and grills the restaurant staff with no success.  After a couple of days, Emma convinces Norma to take a peak in Room 4 for possible clues about Anikka’s whereabouts.  Norma finds an invitation for that night to a presumably illicit affair at The Arcanum Club, an upscale hunting club.  Dressed to the nines and posing as Anikka, Norma attempts to gain entrance to the event but is denied when she doesn’t know the password.  She sneaks her way in through the bushes only to be caught by Romero (attending in a political capacity only, of course) as she peaks into a window revealing gentlemanly escapades.  Norma tells Romero about her concerns and Norman’s connection; he shoos her away, telling her it is unsafe for her to be there.  On her retreat from The Arcanum Club, Norma finds herself face to face with the construction site of the new overpass.  When she reads the sign “Lee Berman Memorial Bypass: Opening This Fall”, she uses sticks, stones, orange cones…and the front bumper of her car to attempt to destroy it.  When she returns to the motel, breathless and filthy from her adventures, Norman validates how hard the past two years have been for her and assures her, “It’s all going to be good, Mother.  You’ll see.”

In the final frame of the episode, we see an obedient retriever barking lakeside over a prostrate and naked female corpse who may (or may not) be our missing Room 4 tenant. Stay tuned…..yawn.

Opinion:  The time gone by since the Season 2 finale is confirmed as Romero mentions it has been 3 months since Zane torched his house.  Romero’s inescapable obligation to Norma is evident both in his awkward Bates Motel departure as well as his anticipated involvement in Anikka’s disappearance. It hardly helps Romero’s vulnerable uncertainty that Norma tells him she feels safe when he’s around.  Norma is falling apart in her defense of her son, constantly unsure of when his psychotic propensity will manifest itself.  Norman drifts in and out his roles as obedient son and giddy new boyfriend while he weakly convinces Norma and Emma of his good intentions amidst twitches of distrust and nervousness.  Emma is forward and flirtatious with Norman and it will be interesting to see how he processes her simple seductions.  Dylan is submissively childlike around Caleb, clearly falling for the paternal protection he never had. The wowless factor surprisingly continues into the second episode of the season and the score seemed to be more predictable than most other episodes.

“Keeping the Creepy” Score:  3.  Creepily hilarious, actually, when Norma proclaims to Norman: “Unhinged women seem drawn to you!”  Oh, and then there was the part when Norman the Amateur Taxidermist loving caresses the scalp of a baby goat and purrs about how beautiful she’s going to be when she’s done.  Be still, my bleating heart.