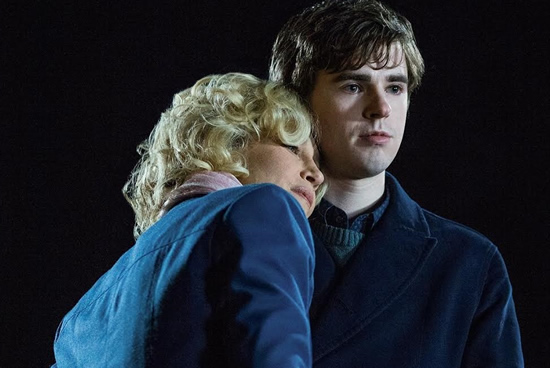 Summary with SPOILERS:  Dylan discovers the guitar that Caleb dropped off as a parting gift.  When he visits Caleb’s secret hiding place, the campfire is still smoldering but no sign of Dad.  Dylan leaves Caleb a voicemail, telling him to go to hell for taking off without a proper goodbye.

Emma’s dad tells her that she’s been bumped up on the transplant list and needs to be prepared to leave ASAP.  Clearly shocked by news, Emma sneaks away. Mr. Decody calls Dylan worried about Emma’s absence. Dylan finds her seeking solace at his cabin. When Emma reveals that she’s afraid she’ll die sooner than naturally intended if she gets the transplant, Dylan praises her strength. They kiss and he orders her back home with a smile.

Norma visits Pine View, a luxurious mental care facility, only to discover that the cost is $20K to 40K per month.  She fades in and out of her conversation with the caseworker, aware that she has no insurance, referring doctor or diagnosis.

Bradley breaks into her mother’s house and steals a crapload of jewelry and cash before demolishing all breakables with a golf club.  When Norman visits her back at the hotel, she begs him to escape with her after dark.  Twitchy and distraught, Norman confesses that he doesn’t know how to leave his mother just as she returns from her visit to Pine View. Bradley keeps the offer open in case Norman changes his mind.

Norma asks Norman to sit and talk as she hides the brochure.  She comes clean and calmly tells him how worried she is about him and his blackouts.  Norman points out that he’s not in school and doesn’t drive, two big safety triggers. Norma continues that she thinks Norman needs real doctors, therapy, medications…the works. She adds that he’s going to outlive her and she wants to be sure he is safe.  Norman stares at her astonished and betrayed as she describes the facility she visited.  He tells her that he’s glad to officially know that she has given up on him. She refutes that she is only trying to help him as he goes upstairs to his room.

Romero stops at the motel after the DEA briefing outlining the planned siege on Bob Paris’ house. He tells Norma that while he will not apologize for turning over the flash drive, he is sorry that he could not protect her.  She acknowledges how the whole mess cannot be hidden any longer. She tearfully describes her fear that Paris has the power to put Norman in prison for defending her from her abusive husband.  She chalks it up to fate with a weepy smile and thanks Romero for visiting her.

Romero calls Bob Paris with a 10-minute warning while in the DEA caravan. Paris sneaks away and boards his docked boat only to discover Romero there waiting for him.  Romero notes how he could never afford a boat like this on a sheriff’s salary and points out how he was the only one not benefiting from all of the money floating around town.  Surrendering his hidden pistol upon request, Paris promises to leave White Pine Bay forever and never say a word about “that wacko Norma Bates and her kid”.  Romero reminds him about the girls he murdered.  Comparing him to his father, Paris tosses back to Romero how it’s all about him and what he wants.  He laughs that Romero has become the man he’s always hated but stops chuckling when Romero sends bullets through his throat.

After her melancholy moment with Romero, Norma returns to the house to find Norman and his suitcase. He tells her that while he loves her, they’re horrible for each.  She agrees they need some separation but not permanent. He tells her that he is leaving with Bradley.  She yells that Bradley Martin committed suicide and as they each struggle for his suitcase, Norman forces her down the stairs.  As he tries to leave the house, Norma knocks him unconscious with a cast iron doorstop. She drags him down to the basement, binds his wrists and ankles and runs upstairs to frantically call Dylan who arrives quickly.  He goes downstairs to discover Norman has escaped through the window.  When Norma tells Dylan about Norman’s plan to run away with dead Bradley, Dylan tells her the truth about the staged suicide.

Norman meets Bradley in the woods and thanks her for coming back to get him. She is optimistic and carefree about their escape and tells Norman that she’s proud of him for taking the plunge.  As Norman catches sight of the “Leaving White Pine Bay” sign, Imaginary Norma appears in the backseat demanding to speak to Bradley.  Norman forces Bradley to pull over and channels Mother scolding Bradley for playing the little sex kitten routine.  Imaginary Norma pulls Bradley out of the car and smashes her head to the ground, growling that no one ever gets between her and her son.  Realizing that he is holding Bradley’s bloodied, lifeless head in his hands, Norman cries, “Mother, what have you done?”  As Norman pushes Bradley’s car (and trunked body) into the lake, he apologizes for what his mother did to her.  Imaginary Norma stands behind Norman, bragging that she did Bradley a favor. She tells Norman that Bradley was going to take him away from her and that she could never let that happen. She promises that she will take care of everything and that this will be their secret. Norman agrees that they will always be together.

Opinion:  This season finale was somewhat juicy but mostly weak. There were no surprises except for Romero killing in the name of love….and hate. He was able to protect Norma after all but might have saved a bullet or two had Paris not mentioned his pappy. Otherwise, I saw the rest coming: Caleb leaving without saying ‘goodbye’, Dylan and Emma sucking face, Norman channeling Mother as he kills someone. Is it just me? I do, however, have to profess my love for Norma’s grounded and poignant outlook on Norman and his future. “He’s my son and he’s broken.” Do I speculate on the next episode that might not even happen? And if it does, I have to wait 10 months to see it?!

“Keeping the Creepy” Score:  5 – Norman killing as Mother, albeit predictable, is creepy.  The closing soundtrack is once again spectacular: “So won’t you please be my, be my baby. Be my little baby. My one and only baby.”