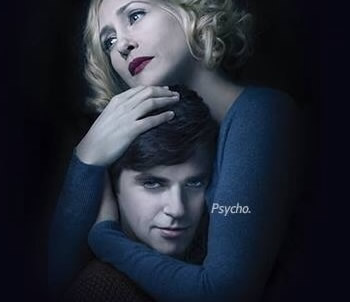 Bates Motel Season 3: Episode 1 “A Death in the Family” Recap

Synopsis: Norman gets promoted from student to Motel Manager; Dylan teeters on a cannabis cliff; Norma and Caleb deal with their mother’s death.

Summary with SPOILERS:  Summer has gone by since we last saw our friends from White Pine Bay.  Despite the suggested passage of time, many things seem fragmented: Norman, Norma and Dylan are thick as thieves; the DEA has torched 27 pot fields and made 43 arrests; and talk of building the new bypass right through the Bates Motel is back on the docket.

Norman’s return to school for his senior year is filled with dread yet Norma insists he return.  After a horrific hallucination of Miss Watson in the school cafeteria, Norman bolts back to the motel.  Norma suggests that Norman switch to home schooling to gain his diploma and promotes him to Motel Manager now that he’ll be around more often.  She also confesses that she wants to take a business course at the community college to strengthen her punch in the fight to keep her motel.

Emma learns that Norman is not returning to school just as she receives the news that her lung capacity is at an all-time low.  Norman suggests that Emma home school with him and that they can study at the motel together.  Norman declares that it is finally time for them to date.  Emma is ecstatic although jokes that he only wants to date her because he thinks she’s dying.

Dylan discovers Norman sleeping in bed with Norma as he heads downstairs for breakfast.  He lectures Norma on the abnormality of an 18-year old sharing a bed with his mother.  That night while watching TV together in bed, Norma announces she’s ready to go to sleep and sends Norman to his own room.  She shares Dylan’s observation and Norman leaves her room childishly slighted.

Norma learns that her mother has died when she receives a call from the executor and tells the caller that she is not interested in any part of the estate.  She separately tells Norman and Dylan that her mother has died and while she insists she is fine, she is clearly unsettled by the news and her own emotions.  She shows Dylan her mother’s blue hair ribbon and recalls that her only memory of her mother sounding happy was when she talked about wearing the ribbon to a school dance.  Norma tells Dylan that her mother was always sedated and that it was something that was never discussed.   When Norman later discovers Norma crying about her mother’s death, she reveals that her grief is over never having really known her mother combined with Norman growing up.  He tells her that he’s not going anywhere and they assume spooning positions in Norma’s bed.

Caleb returns to town and approaches Dylan about giving him cash from the sale of his deceased mother’s house.  Dylan declines and demands that Caleb get lost.  Caleb tells Dylan that now that his mother is gone, he has no family except for Dylan, who he admits is his son.  He talks about the life that he and Norma endured with their crazy mother and violent father and how the only safe place they had was with each other.  When supposed van trouble keeps Caleb in town longer, he once again begs Dylan for some time with his son.

Dylan is keeping a small piece of land and cottage on a lake which he hopes to turn into his own farm.  Gunner shows up and asks for work saying that Remo sent him after all the DEA crap went down.  When Romero meets with Dylan to talk about the future of things around town, Dylan reveals that he no longer wants to be a boss in the drug business.  He tells Romero that he wants to legally grow medicinal marijuana and make just enough money to get by.  Romero looks discouraged and a little betrayed and warns Dylan that he cannot protect him if they no longer work together.  Dylan is left deflated and a little unsure about his decision.  Romero is approached in a bar by two men who lost their jobs due to the DEA raids.  They criticize Romero for letting the feds in, pointing out that White Pine Bay has been growing weed for nearly 40 years with no problems from the outside.  When one of the men brags that he would kick his ass if he weren’t a cop, Romero renders him unconscious with a head slam to the bar before tossing his cash on the bar and exiting.

A beautiful woman named Anikka checks into the Bates Motel.  She is sweet and dressed provocatively enough to unnerve Norman, who is caught peaking down her dress.  She shares with Norman her professional life of big, expensive parties with wealthy men as he changes a light bulb in her room, leaving him nervous and breathless outside her door.  While shooing away a raccoon digging through trash behind the motel, Norman cannot resist peering into Anikka’s bathroom window to watch her shower.  Norma catches him and berates him back at the house.  Norman seems genuinely remorseful and promises it will never happen again.  Anikka visits the motel lobby where Norman and Emma are studying and asks for directions to a restaurant.  Norman offers to ride with her and walk back once she finds the place. On the ride there, she tells Norman how she didn’t have the luxury of having a mom care for her the way Norma cares for him.  She goes on and on that sex is sex and she does it to make a living.  Norman starts to drift as he listens and stares.  He directs her to turn down the road up ahead.  Emma closes up the motel lobby alone at a presumed late hour.  Once her VW is out of sight, Anikka’s car returns and Norman climbs out of the driver’s seat.  He proceeds robotically toward the stairs of the house.

Opinion:  Hardly a season premiere but a worthy episode 3 or 4.  With the heads of both drug families dead, it is apparent that they were (oddly enough) responsible for keeping the peace in White Pine Bay. Dylan was barely a worthy replacement for either or both rings and it appears Romero lost control rather quickly.  It will be interesting to see how/if he regains some clout.  Norma’s turmoil as both daughter and mother is raw and real and her attachment to Norman is validated through the death of her estranged mother.  Norman’s infatuation with Anikka comes across as textbook as a schoolboy with a centerfold…but he most likely killed her, right?  Hmph.