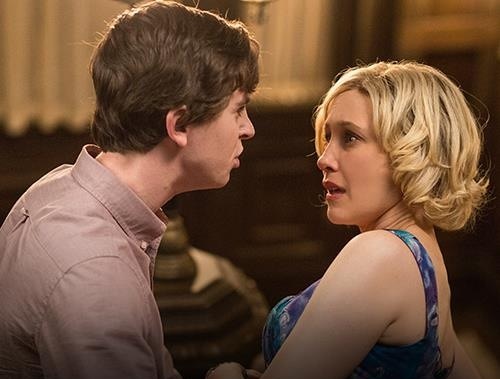 Summary with SPOILERS:   Nick Ford visits Norma at her home and asks her to arrange a meeting between him and Dylan.  Norma tells Nick that she and Dylan are not on speaking terms.  Nick shares with Norma that he was estranged from his daughter when she died and encourages her to talk to Dylan before it’s too late. Nick returns to reiterate his request and talks with Norman about Blair after he recognizes Norman as the photographer from the cemetery. When Norma returns home, she sends Norman to the kitchen and berates Nick for giving her orders to set up the meeting.  When she tells Nick that she is not “beholden” to him, he disagrees and tells her that he got her the council seat and he was responsible for Lee Berman’s death. Norma tells Nick that she doesn’t like him, doesn’t trust him and doesn’t want him talking to Dylan.  When she threatens to call Romero, Nick leaves after telling her that she’s making a huge mistake.

Dylan wakes in the brush outside the Ford warehouse and flees to Jodi’s house.  Zane suggests they should offer an aging Nick Ford a buyout with consequences if he doesn’t agree.  Dylan tells Zane to go lay low as there are a lot of pissed off people looking for him.   Norma visits Dylan at his office and tells him about Nick Ford’s request. He tells her that Nick is in charge of the rival drug family and to stay away from him.  Dylan calls Nick and arranges to meet him at a public restaurant outside of White Pine Bay.  Nick tells Dylan that the war will stop here if Dylan kills Zane and emphasizes that you can’t start a drug war unless you’re prepared to be the last man standing. When Nick asks Dylan if he and his family are prepared, Dylan replies, “Stay the hell away from my mother or I will kill you.”  Dylan returns to Jodi’s house and tells her that she is the only one who has the power to stop Zane.  Jodi is unsure of what to do and tells Dylan (while in his arms) that he has her permission to do what is necessary to deal with Zane.

Norman’s feigned politeness with Norma greatly affects her.  She pleads with him and confronts him for acting so distant.  When Norma tells him that he’s acting like a dick for something that isn’t her fault, Norman lashes out with a passionate and calculated opinion of their relationship.  He clarifies that what Norma calls ‘distant’ is actually Norman being his own person with his own secrets.  He tells her that she’s not who he thought she was and that he no longer trusts her.  He declares that their devotion and love for each other was all a game.  Norma responds with tears and pleas, and then switches to anger when Norman locks himself in his room.  Norman grips the footboard of his bed with cold and contained rage as Norma exits the house in a spiteful promise to leave him alone.

Norma is visited by George at the motel who announces that the bypass project has been temporarily halted for environmental studies.  When Norma gives him a celebratory hug, George tells her that being just friends with her isn’t enough for him and invites her to his house for a proper dinner date.  Norma shows up at George’s beautiful home, distracted by her distance from Norman and troubles with Nick Ford.  She quickly excuses herself, declaring that she has lied about her past and that she is not the educated, polished woman he thinks she is.  Norma returns to George’s home after her blowup with Norman and stoically insists they have sex immediately.

Sheriff Romero orders his Deputy to find Zane Morgan’s location and report back to him.  Romero shakes down Dylan for Zane’s whereabouts and warns Dylan that if he’s lying, he’s dead. Romero asks Norman to help him with a repair in his motel room and then subtly grills him about his relationship with Blair Watson. Romero reveals that she had sex with lots of (some not nice) people and asks Norman if he had sex with her.  A frazzled and confused Norman has no answers to Romero’s questions and runs back to the house while Romero continues shouting after him to tell the truth.  When Kyle Miller (Semen Sample #1) is convicted of the murder of Blair Watson, Romero tells the Deputy that if she tells anyone about the new evidence, he will hang her from the highest tree for illegally running a sample in the criminal database.  Romero confronts Norman again at the motel, this time with the news of Kyle Miller’s conviction. He tells Norman that he has proof that Norman had sex with Blair the night of her murder and that he needs Norman to cooperate or else he will have to involve his mother.  Norman denies it and runs to his bedroom where he calms himself with Blair Watson’s obituary in one hand and her pearls in the other.  He hears what he thinks is his mother returning home and when he enters the living room, he is rendered unconscious by a thug with a drugged handkerchief.

Opinion: Episode 8 is practically perfect.  The featured characters and themes are finely marinated together in a huge boiling pot (with the teenage romances thankfully kept on the backburner). While I find Sheriff Romero’s fury rather yummy, I’m on a seesaw with his approaches; one side protecting the Bates family, the other side keeping the peace at all costs with no rules.  He seems surprisingly oblivious to how disturbed and volatile Norman really is.  It’s becoming ridiculous that Zane has been allowed to do as much damage as he has and I hope someone makes him go away soon.  I really dig how much Norma and her boys have turned White Pine Bay on its side.

“Keeping the Creepy” Score: 8  – So many scenes…Norman’s pretend pleasantries with Norma; The Obituary and the Pearls; Norma’s empathic awakening when Norman is attacked.  And my favorite “Psycho” allusion to date: Sheriff Romero asking Norman to help him reattach the shower curtain rod that was torn from the tile in his motel room. Marvelous!