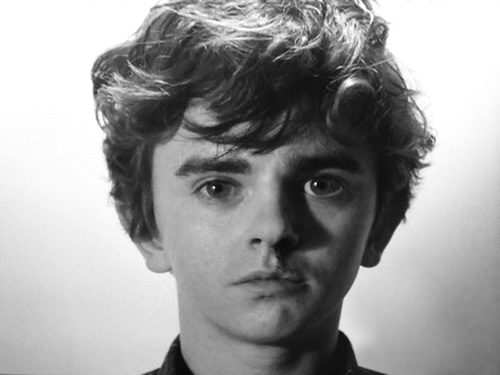 Synopsis: Norman is off the hook; Norma struggles to protect Norman; Dylan fights his demons.

Summary with SPOILERS:  Norma leaves a voicemail for Norman full of guilt and worry about his whereabouts after leaving her curbside.  She heads into city hall to pick up her council accoutrements by an unimpressed clerk when a neighboring council member introduces himself and apologizes for missing the meeting where Norma called Berman “a dick”.  Just as he dives into her suspicious reasons for getting the seat, Sheriff Romero interrupts them and pulls Norma outside.  He tells her that Norman is fine but that Cody’s father was killed in what appears to be self-defense.

Norman sticks to (what we know to be) the truth each time he recalls the events at the Brennan home and reiterates that he was trying to protect Cody. Romero tells Norman that Cody will go live with her aunt in Indiana then sympathetically tells Norman that Jimmy Brennan was always an angry man.

Norma finally gets to see Norman but cannot hide that she does not wholly believe that Brennan’s death was an accident. She pleads with Norman to not tell anyone that he told Cody about his history of blackouts because if they learn certain things about him, it will make it impossible for them to believe his story.  Norman is floored by his mother’s uncertainty and suspicion and when Romero gives him the choice to have Norma in the room for additional questioning, Norman declines.

Norma sees Cody enter the station and head for the bathroom.  She follows her and begs her to not tell the police about Norman’s blackouts. George arrives to support Norma and is seen hugging her tightly by Norman as he exits the interrogation room. Cody is escorted out of the interrogation room with a pained scowl tossed at the Bates twosome, causing Norman to bolt outside for some fresh air. Norman asks Norma why George would believe he is innocent if his own mother doesn’t.

Cody visits Norman before heading to Indiana. When Norman apologizes, Cody tells him that her father probably had what was coming and that Norman shouldn’t blame himself.  She insists on a final goodbye at that moment when Norman suggests they keep in touch.  After a farewell kiss, Cody tells Norman that he needs to find out what it is that terrifies his mother about his blackouts.  When Norma ecstatically runs home to tell Norman about the accidental death ruling, he gratifyingly lets her know that Cody told him she is lying to him about the seriousness of his blackouts.  Norma easily shifts into Mother Bates mode, turning it back on Cody, but Norman demands to know what is wrong with him.  She breaks down and tells Norman that he has to trust she is protecting him and that she will not answer his question.  Norman storms out when she concludes that he is to never ask her that question again.

Emma goes to the police station and offers to stay with Norma while she waits to see Norman. Emma meets with Dylan to persuade him to put aside the negativity and be there for his family during this difficult situation.  Dylan refuses and asserts that Norma and Norman only care about each other. Norman tells Emma that he went to Cody’s house because he was mad at her for telling Emma about his blackouts.  Emma explains that she told Norma because she was worried and scared for Norman to which he thanks her for believing in him.

Dylan returns to work and is teased by Remo for sleeping with the boss. Zane tells Dylan that he knows about his sister’s plan for Dylan to be his babysitter and warns him to manage his expectations. Zane hires 3 new goons to help send a message – a raid on Nick Ford’s warehouse.  Dylan tells him that it’s too big a message but gets the butt of Zane’s weapon to the forehead for refusing to be on board with the raid.  Through blurred vision and muffled hearing, Dylan witnesses the flashes of a full-blown gunfight through the frosted windows of the warehouse.

Deputy Sheriff Lynn, the late Zack Shelby’s scrupulous replacement, gathers evidence from mugshots to cheek swabs and informs Norman that even accidents need to be investigated.  After Brennan’s death is officially ruled an accident and Norman is cleared of any wrongdoing, Lynn calls Romero to tell him that the test results show that Norman’s DNA matches the second semen sample found in Blair Watson the night of her murder.

Opinion:  Darkness surrounds Norman in Episode 7 through the secrecy and mystery of his blackouts and his profound anger at his mother’s lack of trust. Sheriff Romero becomes his most human so far, seeming genuinely invested in the wellbeing of the Bates duo while knocking back pills with swigs of whiskey.  Blair Watson’s name dancing to the Norman Bates blackout earworm…nifty cliffhanger.  Exactly why I don’t ever watch the teaser for next week’s episode.