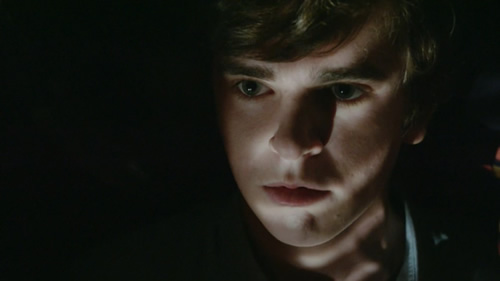 Synopsis: Norma discovers friends in high places; Dylan and the boss make a deal; Norman puts his foot down.

Summary with SPOILERS: Norma confronts Norman about trust and questions allowing him to get his driver’s license when she learns he’s been drinking with Cody. Norma visits Nick Ford at the marina where they discuss Lee Berman’s accident.  When Nick comments that death can be convenient, Norma tells him that she doesn’t want anything to do with him. Nick suggests that Norma is backing out now that he has paved the way for the bypass to be stalled, then parts company sharply wishing her well.  Christine visits Norma at the motel and tells her that her brother George is going to help Norma get Lee Berman’s vacant council seat. Norma regains some confidence when Christine and George both insist that her dynamic and captivating personality is what will win her the seat.  Upon learning that Norma is going to meet with the Mayor, Sheriff Romero tells her that she will not get it due to the deep, dark politics of the town.  During her meeting with the Mayor, Norma discovers the power behind the endorsements of her new friends.  The Mayor uncomfortably yet clearly communicates how much Nick Ford wants her to be on the council.  The next morning, Norma gets the call that she has won the seat.

Dylan is discharged from the hospital and picked up by Zane’s sister (the boss) who takes him to her home in the country until things blow over.  She tells Dylan that she inherited the pot business from her parents and gives him a tour the lofted greenhouse where she keeps strains and crossbreeds varieties.   She admits that she never should have chosen her brother to takes Gil’s place and asks Dylan to basically run things while pretending Zane is still in charge.  She later climbs into Dylan’s bed for a no-strings-attached shag.

Emma and Gunner (Cannabis Cupcake Boy) bring a blanket down to the river to discover that another couple had the same idea first: Norman and Cody.  Per Cody’s suggestion, the four of them strip to their skivvies and take turns diving into the cold water.  Wanting to impress Gunner and feeling intimidated by Cody, Emma ditches the oxygen and jumps in but needs to be rescued from the water by Norman.  She later visits Norman in his taxidermy lair and thanks him for saving her life with a kiss on the cheek.  Cody visits Emma in the motel office a few days later, apologizes for the peer pressure and suggests that Norman might need help.  She tells Emma that Norman has blacked out twice in her presence.  Cody promised Norman she wouldn’t tell his mother but knows that Norman likes and trusts Emma.  Emma calls Norma and tells her what Cody shared.

Norman and Cody ditch working on the musical set and stop at her house for booze before heading to the river.  When Cody’s father returns home unexpectedly they hide behind louvered doors where Norman flashes back to being a toddler hiding in a closet with Norma.  Cody coaxes him back to the present after flickering scenes of his father hitting his mother send him into a blackout.   After rescuing Emma from her dive into the water and ensuring she is safe, Norman erupts that it would have been Cody’s fault if Emma died and accuses her of using people as play-toys.  Norman repeatedly asks Emma in the basement later if he overreacted at the river, which she downplays considerably. Norma gets the call from Emma during Norman’s driving test then tells the instructor that Norman has been having blackouts, resulting in a 3-year waiting period of no episodes before he can take the exam again.  When Norman accuses Norma of making up the blackouts to keep him from driving, she lets him know that Cody told Emma.  Norman screams for her to pull the car over and jerks the steering wheel off the road.  A frail and vulnerable Norma tells him that she’s worried about him. Norman tells her that she cannot keep him locked up in the house for the rest of his life.  She kisses him on the cheek and lets him walk away.  Norman goes to Cody’s house and berates her for telling Emma and betraying his trust.  When Cody’s sleeping father interrupts them, a wired Norman dismisses him.  The father punches Norman and assaults Cody for bringing her trashy hook-ups back to his house.  Norman charges at them and shoves Cody’s dad into a twisted mess at the bottom of a flight of stairs.

Opinion:  The character of Norman Bates bursts alive in Episode 6 with a plethora of emotional scenes: tenderness, jealousy, protectiveness, rage…and his strongest push for independence from his mother to date. We witness the strong, suppressed commitment between Norman and Emma and are once again shown a softer, less rebellious side of Cody.  Norma and Romero continue to explore their awkward comfort zone.  The Mayor shows us more of just how deep the fears and pressures run in White Pine Bay.

“Keeping the Creepy” Score: 8 – Norman has many shuddersome moments from his jealousy of George complimenting Norma to his rolling horizontal embrace of his mother upon learning she won the council seat. His episodes of hostile confidence are magnificent. The sappy pop standard blaring from the car radio while Norman leaves his mother curbside is also rather lovely. Even Sheriff “You Can Call Me Alex” Romero is part of the rating this week when he tells Norma that he can see into her bedroom window at night.  Tangy….