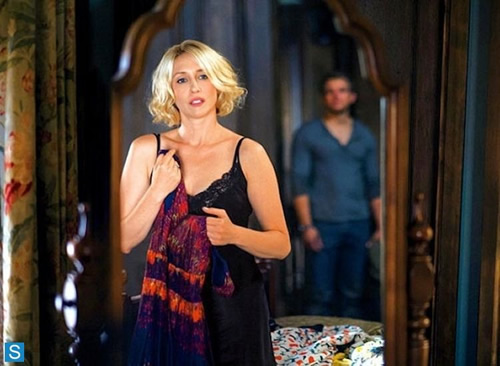 Summary with SPOILERS: Norma discovers that she doesn’t get the part in “South Pacific” just as fiery Christine bursts out of the playhouse announcing she has quit due to the decision.  She insists on taking Norma out for a drink (at 11 am), tells her that she is one of the most interesting people she has met in town, and promises to introduce her to the “real White Pine Bay”.  Christine invites Norma to a garden party at her modern home of elaborate landscaping and glass waterfalls before it quickly becomes clear that Christine’s affections include setting Norma up with her recently divorced brother, George.  As Norma waits for valet to bring her car, Nick Ford approaches her, commends her on her guts at the city council meeting and agrees to meet her for coffee sometime.

Emma organizes a bonfire memorial for Bradley but when the gathering turns into a hedonistic beach party, Emma admits to Norman that she still doesn’t like Bradley even though she’s dead. Emma’s guilt leads to some excessive alcohol consumption and a sloppy reunion with cannabis cupcake boy from Season 1.  Norman runs into cashier Cody who introduces Phillip, a young man interested in both Cody and her new friend. While walking Cody home, Norman learns that he is perceived gay by most of his peers and Cody recommends he get out more to dispel the rumor.  Cody tells Norman that she’s going to go inside through her open bedroom window even though her dad lets her go out whenever she wants.

The Ford family decides that Johnny B’s life is worth two lives in retaliation.  Zane announces that two of their lives might be worth 10 or 12 Ford family members, after Dylan fails to convince him to forget about further retribution.

Norma’s brother Caleb arrives at Bates Motel and is greeted by Dylan who insists that Norma doesn’t have a brother.  When Norma returns home, she is stunned by the presence of Caleb and Dylan sitting at the kitchen table and physically pushes Caleb out of the house, warning Dylan to never let him back in their home again.  Caleb approaches Dylan outside the town hardware store and apologizes for getting him in the middle of things.  He heavily hints at the hard times he and Norma had with their father and asks Dylan to join him fishing, which Dylan declines but suggests dinner instead.  Back at the house, Dylan tries to persuade Norma into opening up about her past and her brother but she refuses.  Over drinks, Caleb reveals that his reason for visiting Norma was to offer her a real estate partnership opportunity in Costa Rica to make up for everything they’ve been through with their parents.  Affected by Caleb’s disappointment, Dylan leaves and returns with $11.5 thousand in cash to ensure the transaction.  When Dylan goes home to tell Norma of Caleb’s intentions, the two viciously exchange confessions and accusations until Norman bursts in and starts punching off his brother’s face.  Norma screams for them to stop and succeeds when she finally reveals that Caleb is Dylan’s father.

Opinion:  Norma’s confidence takes a roller coaster ride through the ups of the praises from Christine and a possible match with George to the downs of Caleb’s appearance and Dylan’s naive betrayal.  In this episode, Norman steps aside (both physically and emotionally) while Dylan’s character achieves a depth filled with innocence and vulnerability.  Dylan’s familial void filled by Caleb’s words is violently emptied at the dropping of Norma’s incest bomb.  Low-hanging fruit is left when Cody loses her cockiness at mention of her father.  Also, Nick Ford’s appearance seems gratuitous unless his new connection with Norma amounts to something down the road.

“Keeping the Creepy” Score: 1 – The creepiest part of Episode 3 is the absence of creepiness.  The episode lacked any inappropriate innuendos, dark humor or grand-scheme-of-things statements about any of the characters.  Shame…