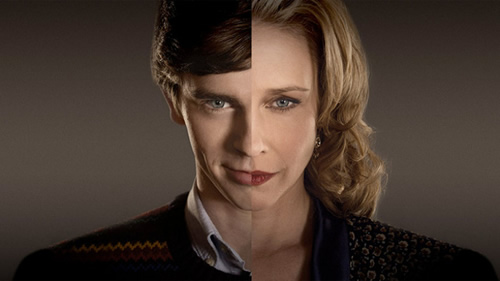 Summary with SPOILERS: Bradley confesses to Norman, who stashes her in the basement while he plans her escape from White Pine Bay via hair dye, sunglasses and a bus ticket to Boise.  When Norman cannot break away to drive Bradley to the bus station, he calls Dylan, tells him the entire saga and asks him to take her to catch her ride.  Sitting in the diner waiting for the bus, Dylan easily convinces Bradley to write a staged suicide note in order to keep her safe from the guys looking for Gil’s murderer.

Norma shifts her focus from the bypass to the new distance between her and Norman. While changing the linens, she discovers a clipping of Blair Watson’s obituary and a string of pearls under Norman’s mattress.  She guilts Norman into trying out for the local community theater production of “South Pacific” but the auditions run late and Norman must call Dylan to be Bradley’s ride to the bus station.   Norma is mortified that Norman runs out of the theater, confronts him about the pearls and cries repeatedly, “I’m so scared.”   Norman reacts to his mother’s weakness and walks her back inside the theater where she floors the crowd with a heartbreaking a capella of Cabaret’s “Maybe This Time”.  Norma’s estranged brother pops into a mechanic’s garage and asks directions to Bates Motel to find his sister.

Sheriff Romero secretly meets drug lord Nick Ford, Episode 1’s Mystery Mourner.  Ford denies any involvement in Gil’s death and points out that the town is putting more effort into a drug killing than the murder of a schoolteacher.  He adds that he knows exactly the kind of life his daughter lived but that the status quo of White Pine Bay is not written in stone.  Romero and crew raid a motel room and arrest crack-smoking shitheel Kyle who was found to be a match for (one of the two samples of) semen discovered in Blair Watson’s body.  Determined to save himself from the consequences of an unsolved murder, Romero charges Kyle with the murder of Blair with no solid proof.

Dylan and Remo wait anxiously for the appointing of Gil’s replacement and wind up with an overzealous Zane who is intent on cleaning up the mess Gil left behind.  He begins by kidnapping a member of the Ford drug family, shooting him in front of Dylan and Remo and ordering them to dump the body off in front of Nick Ford’s house.

Opinion: Episode 2 dives right into the stories outside from Norma and sons.  The layers of the drug ring in town are peeled back; we learn that the Mystery Mourner is a grieving father and that Sheriff Romero isn’t as influential and in command as once portrayed.  The perky, punk cashier who rings out Norman’s purchase of escape provisions is clearly introduced as a future returning character while Emma makes a rehearsed appearance in the final minutes of the episode.

“Keeping the Creepy” Score: 7  Norma soliciting her gynecologist for free medical advice about Norman’s…er, her sister’s blackouts while in the stirrups is just fabulous.  Norma and Norman’s dreamy-eyed duet of “Mr. Sandman” will surely keep the Sandman away. And the closing image of a content Norman on the front steps with Norma’s silhouette in the front upstairs window is why I checked into “Bates Motel” in the first place.