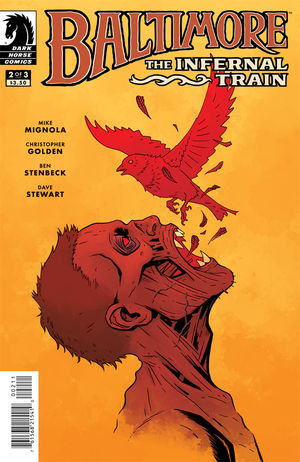 Synopsis: When Baltimore and Duvic find themselves fighting side by side against a plague of vampires, our hero is captured and taken to a weird ritual where a witch plans to feed him to the ancient undead.

Our Thoughts: Issue #2 of Baltimore: The Infernal Train wastes no time in jumping right back into the action .  If you enjoyed the first issue, you will definitely like this one. Mignola and Golden serve up plenty of conflict and fight scenes to keep the reader locked in.  Baltimore and Duvic start of the issue in an intense battle with each other, which soon turns to them fighting the sinister vampires together.  The tension between the two, however, doesn’t go away, and more of the back story is revealed.

The artwork is gritty yet vibrant, capturing the sheer potency and chaos of the situation. The combination of Ben Stenbeck and Dave Stewart once again deliver the goods and do justice to this intricate, yet action packed story.

“Baltimore: The Infernal Train” is an excellent example of why people get drawn into “Mignolaverse.” An engaging, fast paced story filled with mystery, humanity, as well as some pretty gnarly creatures. Issue #2 definitely fulfills the promise comic fans saw in the first issue.  Pick this one up on Wednesday, October 16th!