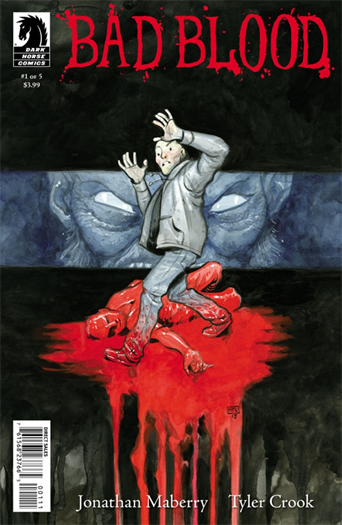 Synopsis: Getting bitten by a vampire pissed him off. Seeing his best friend brutally slaughtered started a war.  Trick was a typical college student, sort of, until vampires attacked. Then he found out his blood was poison to the bloodsuckers. And Trick will do anything to eradicate them.

Our Thoughts: “Bad Blood” #1 sets up for what could be a very promising series.  Our comic protagonist, Trick, is not your usual hero, or even anti-hero.  He’s extremely vulnerable both physically and mentally.  The concept of his chemo and cancer being toxic to vampires is fantastic and adds depth to the story. Definite kudos to Mayberry for this unique twist!  This vampire confrontation also leads to Trick having to find it within himself to fight an evil much greater than he already is.

Cook’s artwork does an okay job of conveying the mood, but there could’ve been a bit more life breathed into the action scenes.  Overall “Bad Blood” #1 sets up for a series that has the potential to be both story driven, yet action packed.  Issue #1 is on sale December 31st.