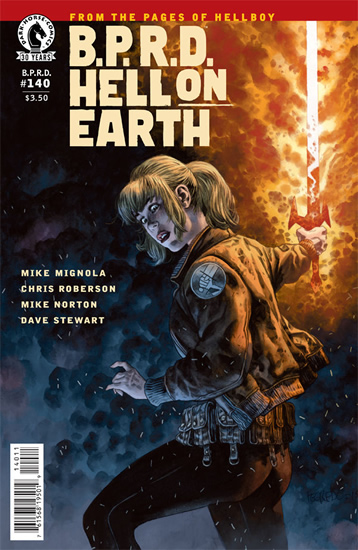 Synopsis:  After the earth shaking battles in recent issues, the B.P.R.D’s resident exorcist, agent Ashley Strode, returns to track down leads in a demonic mystery.

Our Thoughts:  Recent issues of B.P.R.D.: Hell on Earth consisted of cosmic forces and monsters battling for the fate of the world (and perhaps universe) with spectacular battles and creatures galore.   This new issue and storyline sees a return to “smaller” stories featuring classic Kolchak: the Night Stalker type mysteries that the B.P.R.D. was known for at the start of the series.  One marked difference is that the focus is now on a very human hero, as opposed to fan favorite characters such as Abe Sapien or Johann Strauss.

Ashley Stroud gets top billing in this mystery, crafted by Mike Mignola and Chris Roberson of I Zombie fame.   I assumed that John Arcudi was handling the scripting duties as he has for the past few years on B.P.R.D. and I only took the time to confirm it when the story telling techniques reminded me of the recent Hellboy and the B.P.R.D. 1953: Beyond the Fences.  Sure enough, Roberson was the reason for the similarities.  While Arcudi’s scripting focuses on character interaction as the main device used to tell his stories, Roberson uses standard mystery motifs as he sets up each investigation.   This mystery centers on some old fashioned demon hunting and missing children.  While the story is engaging and Strode is a likeable addition to the team, it may take readers of the recent storylines a minute or so to realize that the threat level in this story arc is smaller and on a more personal scale than the previous installment.

I am interested to see where Strode takes us in a more domestic investigation.  For fans of classic horror, be sure to look for the Night of the Demon Easter egg hidden in plain sight.