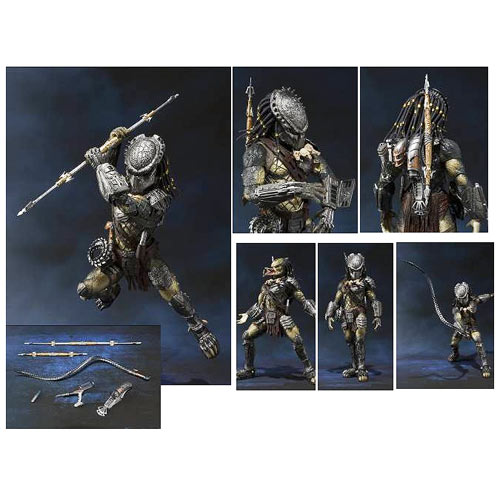 The second figure in the Alien vs. Predator series is one of the main Predators from 2007 Alien vs. Predator: Requiem film! The Predator Wolf from the sequel film comes to the SH MonsterArts line in absolutely stunning detail. A portion of the armor has been recreated in die-cast metal, while the weaponry is molded in finely detailed ABS plastic. Other high quality plastics have also been used to capture the correct look of the body, while the famed “dreadlocks” utilize soft high-quality plastics so as not to interfere with the posing. The Predator’s signature mask can be removed just like in the film, revealing its grotesque organic face beneath. Interchangeable mandibles allow it to either be displayed in normal or howling modes. Plus, as an added bonus, the classic Predator weapon, the wrist blade, can be displayed either exposed or retracted. This Alien vs. Predator Wolf Predator SH MonsterArts Die-Cast Metal Action Figure is the ultimate action figure portrayal of the ultimate Predator warrior and measures over 7-inches tall.