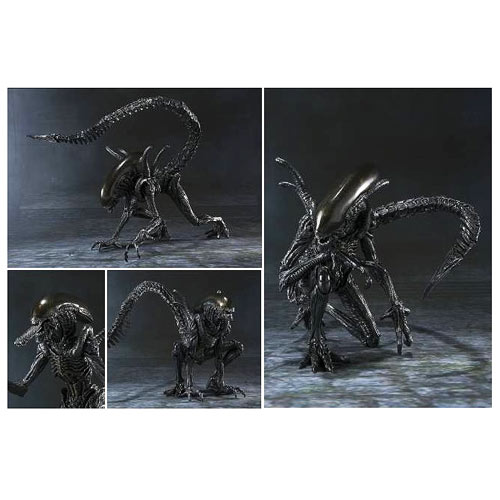 Directly out of 2004’s Alien vs. Predator film comes the sleek reworking of the original Alien design. Accurately replicated in figure form, right down to the translucent head structure and bony armor plating, this Alien vs. Predator Alien Warrior SH MonsterArts Die-Cast Metal Action Figure looks absolutely incredible. Thorough research has allowed for superb detail in the sculpt, bringing out all the fine details almost impossible to see on-screen. The segmented tail of the Alien Warrior is the main attraction of this figure, with each section a separate poseable piece. Adding to its ferocity, the tip of the already dynamic tail has then been sharply molded in die-cast metal: lethal! Accessories include a finely detailed egg chamber and the famous juvenile form of the Warrior, the chestburster. The SH MonsterArts Alien Warrior represents an unmatched pinnacle of excellence for Alien action figures and measures nearly 6 7/10-inches tall.