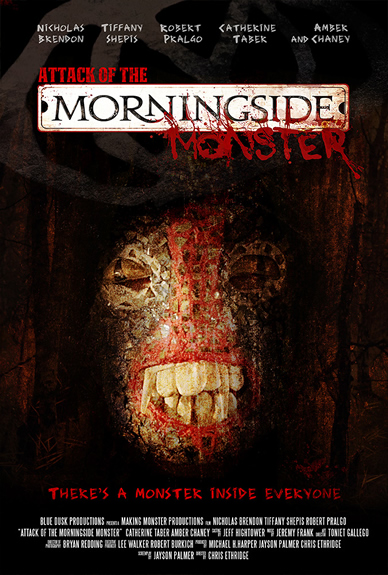 Attack of The Morningside Monster – Review

Attack of The Morningside Monster – Review

Synopsis: When a body is found in the woods outside the quiet town of Morningside, NJ, Sheriff Tom Haulk and Deputy Klara Austin embark on a desperate race against time to catch the killer, pitting them against friends, enemies and even each other.

Our Thoughts: Attack Of The Morningside Monster is about a masked killer attacking petty criminals in a small New Jersey Town. It’s not your typical entry into the genre, with a thoughtful character driven story that, although slow going at times, keeps you in suspense.

It starts off with the murder of a local drug dealer Ryan O’Malley who is killed by a masked individual wearing a black hooded cloak in a ritualistic style murder. Clyde, another drug dealer and man with many enemies in town, finds his car spray painted with a strange symbol, which b of course catches the eye of Sheriff Tom Haulk.When the cops investigate Ryan’s house and find the same symbol that was painted on Clyde’s car spray painted on a wooden the killer hung on the wall.

Later on we see Johnny Eckman and Keith Perkins are hanging out with Clyde one night at Johnny’s house.  The mysterious killer sprays his front door with the same strange symbol and then attacks Johnny. He brings his body to another location and cuts him open with a small saw then proceeds to remove his organs one by one. Although the practical effects aren’t the greatest, this still manages to be quite a gruesome scene.

While examining the body officials find a small piece of what looks like tile in his wounds. Meanwhile, Keith Perkins is working at the local hardware store when he is sent out on a delivery to a boarded up, empty house. The same ritualistic symbol is spray painted on the wall when he is attacked by the masked killer as well. The film progresses with some twists and turns, keeping you wondering who the killer is and if they will ever catch him.

Although there is quite a lot of dialogue in this film, it is not without reason. All of the drama between townsfolk is necessary for the culmination of the story. The execution is a bit slower than it needed to be, and more time could have been spent on the actual killings themselves. But despite those things it turns out to be quite an amazing story with an ending more horrific than you can imagine. All of the acting is excellent, with standout performances by Robert Pralgo, Nicholas Brendon, and Tiffany Shepis.  Although of the film is more suspense than horror, it’s a smart addition to masked killer genre.