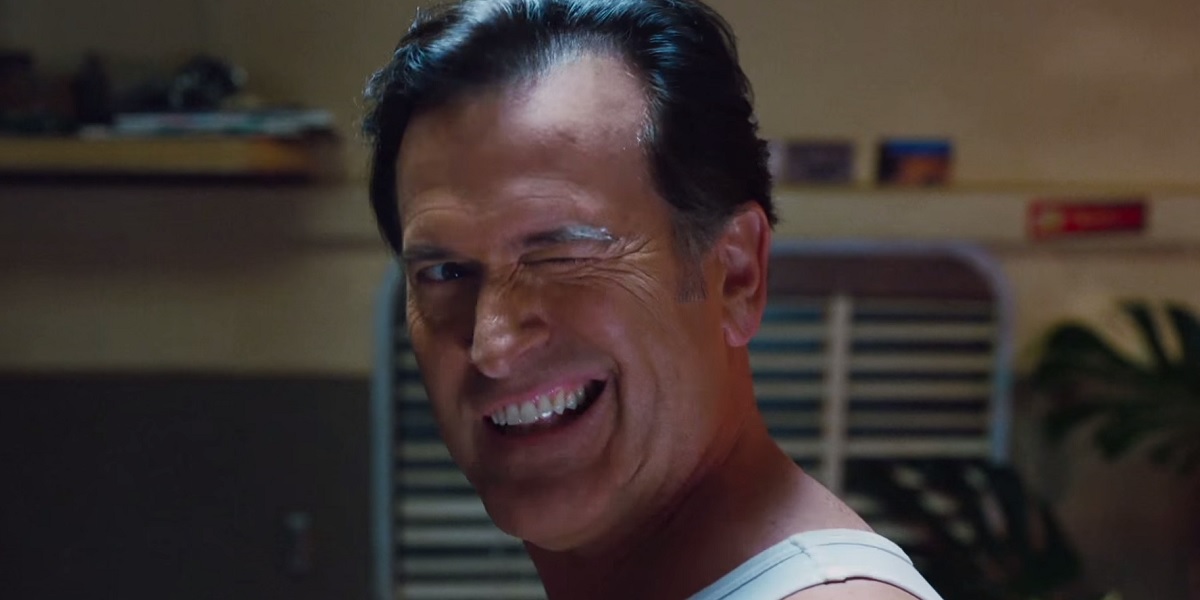 Anticipation. Expectation. Disappointment. These three sensations  are the most common feelings in any form of fandom, especially as decades roll by and fans wait patiently (or impatiently) for the next installment, the next chapter, the next missive from a beloved series or artist.  When the silence is broken and the delay ends, the prodigal hype threatens to ruin the experience. Some works are able to overcome the hype, conquer the jaded, and fulfill fan’s hopes (like Brian Wilson’s legendary lost album Smile); some works are swallowed up by their own overwhelming burden of history and their fan’s projection of their own wants, desires, and nostalgia onto the phenomenon  (the Star Wars prequels).  One such long promised work has been the fourth film in the Evil Dead series (not counting Fede Alvarez’s masterful 2013 remake/re-imaging). The reuniting of director Sam Raimi, actor Bruce Campbell, and producer Rob Tapert to continue the story of Ashley William’s war against the Deadites has been promised and teased for over twenty years.  As the cult status of The Evil Dead, Evil Dead 2, and Army of Darkness have grown exponentially, Raimi, Tapert, and Campbell have worked together on a variety of projects over the last two decades, but all anyone wanted to know was when Evil Dead 4 would come out.  Finally, after countless rumors and speculation seemed to doom the project from ever becoming reality, Raimi and co. threw their fans a curve ball. Instead of a film, the cable channel Starz announced that the continuing adventures of our beloved Deadite fighter would be the subject of a new TV series Ash vs. Evil Dead. The show would premiere on Halloween and the publicity machine went into overdrive. As the premiere date got closer, Evil Dead fans were cautiously optimistic but also had some apprehensions. Would the TV medium be able to do justice to the Three Stooges meets The Exorcist surrealistic anarchy of the films? Could Sam Raimi bring back his manic directing style, a style that really hasn’t been evidenced in the last twenty years? Did Bruce Campbell still have the idiotic arrogance and the ultra-cool, ultra-quotable heroics last seen in 1992?

All fears were put to rest by the first episode of Ash vs. Evil Dead. Combining everything that was so endearing and exciting about the Evil Dead trilogy, Ash vs. Evil Dead is a more than worthy successor to the franchise. The show begins with Ash suiting up for what appears to be a battle but really is just his struggles with a girdle to get ready for a sleazy night on the town. Hanging out at a dive bar, Ash manages to charm some bar skank into having sex with him in the bathroom, using his fake hand to enhance the experience. Ash lives in a trailer park in Michigan, works a low paying retail job (though not at S-Mart; maybe he was fired after the mayhem he caused in Housewares), and has left his encounters with the Deadites behind him. Of course, this being Ash, he once again summons evil through his mishandling of The Necronomicon (using it to impress a woman during a dope smoking, poetry reading session) and the Deadites come back looking for revenge. Ash is joined in the show by his hero worshipping sidekick Pablo (Ray Santiago) and a no nonsense co-worker named Kelly (Dana Delorenzo), but there are other characters that are also affected by the unleashing of the Evil Dead. Amanda Fisher (Jill Marie Jones) is a Michigan State trooper who is mistakenly blamed for her partner’s death at the hands of a Deadite, and Ruby (Lucy Lawless) is an enigmatic woman who seems to have some connection to the Deadites and The Necronomicon. The acting, directing, action sequences, and special effects are all first rate and prove that time has only honed the skills of Sam Raimi. And yet the real test of this show was going to be Bruce Campbell and his portrayal of Ash. Fortunately, Campbell’s performance is right on the mark, transforming the brazen, pomposity of his Army of Darkness persona into a pathetic, self- deluded middle aged loser. But when the chips are down, Ash steps up and proves that no one welds a chainsaw like he does. (Sorry, Leatherface)

Though only the first episode has been shown, there is much here to love and to be hopeful for. Raimi, Campbell, and Tapert have created a series that is faithful to the spirit of the films but also seems to be taking the franchise’s concepts in new directions. Equally frightening and hysterical, Ash vs. Evil Dead may be, if I can indulge in a little of Ash’s patented hyperbole, one of the greatest horror TV shows ever made.