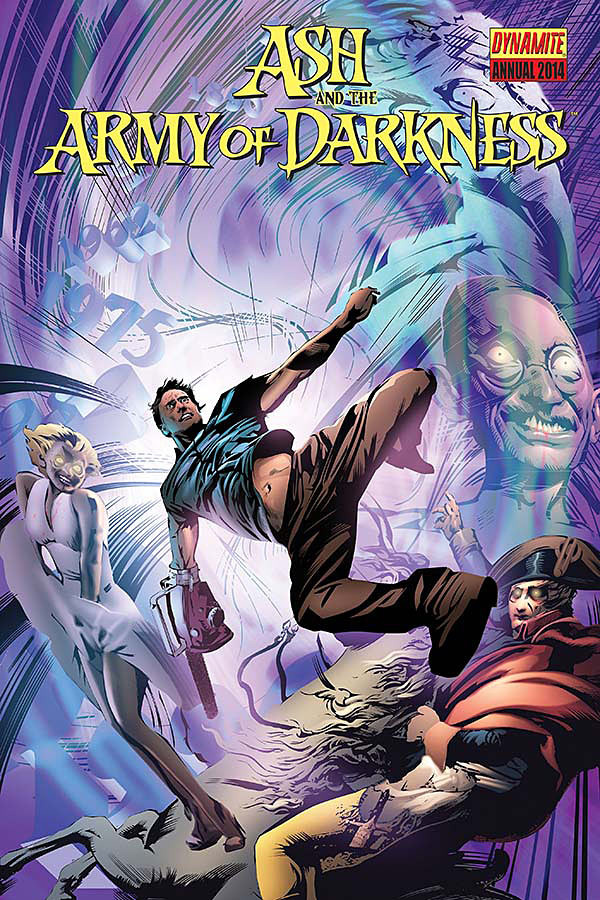 Ash and the Army of Darkness Annual 2014 Review

Title: Ash and the Army of Darkness Annual 2014

Synopsis: We open the book to find our hero, Ash, trapped in a medieval past, once again in jeopardy at the hands of the occult. Witches have stolen Ash’s soul and end up leading him on a game of cat and mouse that spans a millennium to get it back. Talk about a witch-hunt!

Our thoughts: It’s a macabre romp through the ages that will satisfy Army of Darkness fans and average comic readers alike. The stellar artwork by Tenorio will be enough to gratify unfamiliar readers while Denton’s story accurately capture’s Ash’s character and the unique charm of the Evil Dead/AOD franchise.

This annual provides exactly what’s expected from an Army of Darkness book. It’s a fast-paced hack-and-slash with somewhat haughty quips, and a hearse-load of Ash cleaning house with nothing but his chainsaw and a fistful of “Boomstick!”

However, the framing device Denton affords us has Ash falling into different periods of time (Seemingly at random) only to slay a witch and disappear. *POOF* I felt that this in combination with the rapidity of events made the book a little repetitive.  On top of that, Ash’s banter, albeit charming and at times genuinely funny, seemed slightly excessive and at times trite (Even for Ash Williams).

Going into the book as an AOD fan I had an idea of what to expect and, in closing, I’d say Denton did Ash nothing short of Justice in this year’s book. He drew out the distinguishing characteristics of the franchise and of Ash himself. I would have liked to see the pace slowed just a hair to allow time to digest each panel a bit more, but it made for a page-turner none-the-less. It is again as an AOD fan that I want to rate this book an 8, but it is as an unbiased comic reader that I award it a 7 for it’s authenticity, carnage and humor.