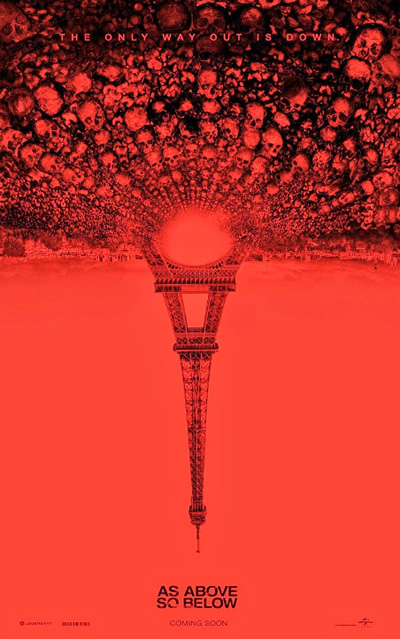 ‘As Above, So Below’ Review

Synopsis: Miles of twisting catacombs lie beneath the streets of Paris, the eternal home to countless souls. When a team of explorers ventures into the uncharted maze of bones, they uncover the dark secret that lies within this city of the dead. A journey into madness and terror, As Above/So Below reaches deep into the human psyche to reveal the personal demons that come back to haunt us all.

Our Thoughts: As Above, So Below is basically your traditional found footage film that takes place in the catacombs. However, the storyline is more unique than you’d expect. We follow alchemy scholar Scarlett in her search for the legendary Philosopher’s stone, a stone her father had spent his entire life looking for. It leads her deep underground to the catacombs of Paris. She is accompanied by cameraman Benji, along with guide Papillion and his two friends, and ex-lover George.

The scene gets weird pretty fast. There are plenty of strange people hanging out in the catacombs at night, including some robed women doing what appeared to be satanic rituals. Scarlett sees what she believes is a secret shortcut to the location of the stone, but after Papillion warns her that they never go that way because no one ever returns if they do, the group continues on the original way they had planned instead. This eerie journey entails crawling over piles of human bones in a very narrow crawl space. It was a very claustrophobic scene, which helped in building huge amount of tension, even for a non-claustrophobic person like me. The tunnel collapses as they are crawling though it and somehow they ended up back where they started, forcing them to take the ominous door that they chose to avoid the first time.

Trapped underground, where even Papillion doesn’t know where they are, they run into his friend Mole, who had disappeared down there years ago. Mole, acting in a bizarre manner claims that the way out was down, and leads this crew deeper underground. This is where Scarlett finds the stone she has been searching for, only to realize that it was a trap when the room collapses and the Papillion’s girlfriend is injured. Scarlett is amazingly able to heal her wounds with the stone.

The overly curious bunch eventually find a drawing symbolizing “As Above, So Below” on the ceiling, and a hidden door that leads them to a tunnel with the words “Abandon all hope, ye who enter here” above it. That’s when the movie starts to get really dark and creepy! Everything becomes very surreal, and their fears start to become reality as they travel further and further underground.

This is a film with lots of puzzles and mystery. It reminded me a lot of survival horror games I’ve played. I really liked that it took a mystical approach, tying in with alchemy and mythology, rather than the usual Satanic religious approach. Being versed in Paganism, it was a familiar topic for me, but won’t be for everyone. “As Above, So Below” is a phrase often still used in magical practices by modern Pagans. The fact that they go so deep underground really made for a very spooky atmosphere. For found footage, I think the acting was excellent. Peridita Weeks stars as Scarlett, and Ben Feldman as George, who were great in their respective roles. It was one of the best found footage films in recent years. I will never be able to look at the catacombs the same way again, and I don’t think anyone else who sees it will either.