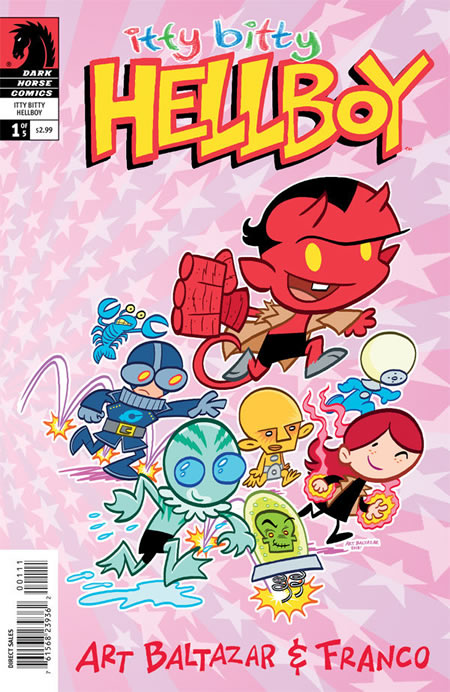 HNN Staffer, Nick Banks caught up with the masters of Itty Bitty, Art Baltazar and Franco Aureliani to talk about Hellboy and monsters!

Read the interview below.

Horror News Network: How did the idea for the Itty Bitty Hellboy comic come about as well as your current relationship with Dark Horse Comics?

Art Baltazar: AW YEAH!! The plans for Itty Bitty Hellboy started with an email from Dark Horse’s Elisabeth Allie asking us if we were interested in making an ALL AGES Hellboy comic. Mike Mignola was interested in making something for his convention table that he can sell to kids. So, Mrs. Mignola contacted Mrs. Allie (the wife of DH’s Editor In Chief) and she contacted us. Simple and effective. Franco and I were skyping at the time we received the email. We responded with a yes in less than 3 seconds.

Franco Aureliani: We were at a crossroads…an in-between jobs thing. We were launching our kickstarter for AW YEAH COMICS and we got an email from Dark Horse. It came as an awesome surprise to know that Mike Mignola likes what you do and that both he and Dark Horse value what we do.

Horror News Network: How do you capture the essence of the core group of Mignola’s Hellboy characters as well as infuse them with the traditional “Art and Franco magic”? Was it more difficult at first to work in the Mignolaverse as opposed to the world of the Teen Titans or Superman?

Art Baltazar: HA! We are fans of Mignola’s work. We have been for a long time. I even have the comic when Hellboy met the Next Men. Comics are a part of my life and my soul.

We’ve been reading comic since we were little kids. Comic Books are what I know. Working on different characters from different universes isn’t too difficult. It feels like when you were a kid and your “Super-Hero” action figures might have an adventure with your “Planet of the Apes” figures and then meet “Star Trek Aliens” and then lead to a team up with Spider-Man and Green Arrow. It’s all the same world to me.

Franco Aureliani: Mignola’s characters are awesome! They are so much fun to work with. The Art and Franco magic just works when we work together- something that happens and we think is funny and we write that way. It’s different and no different than working on Teen Titans, Superman or Hellboy. Different because they are different characters with different motives and traits but the same as we are/have been fans of those characters for a long time.

Horror News Network: Readers of all ages loved the first series. What do readers have to look forward to in The Search for the Were-Jaguar?

Art Baltazar: AW YEAH! Lots more of the same stuff and MORE! We like to add characters that have not been used before! This time we added KATE to the Itty Bitty Universe as well as BEN the Loveable Were-Jaguar! It’s funny, the comic started out as our main characters searching for the elusive beast, but before you know it, we’ve added zombies to the mixture. We’ve been feeling that supernatural islander vibe lately.

Franco Aureliani: The island of Rogers! We find out about pants! Who should have them and who shouldn’t.

Horror News Network: Which characters are the most fun to write (and draw) for the series and why?

Art Baltazar: I love working on Hellboy and Liz. Hellboy is ready for anything. He’s always ready to get into mischief, or press a button, or open a door. He is a very curious little guy. Liz on the other hand, thinks about the situation first. She is always thinking about the consequence. Like, “I don’t think that is a good idea, Hellboy.”

Horror News Network: Favorite movie monster of all time? Why?

Art Baltazar: AW YEAH MONSTERS!!! I always liked the Wolf Man! He’s creepy, hairy, and vulnerable. He can only be killed from silver by someone who loves him. Also, the classic monsters move a lot slower than our modern monsters. And, I like his fangs.

Franco Aureliani: My Favorite movie Monster! I’m old school and undecided! Toss up between Dracula and Frankenstein! I love the big lumbering guy- and he’s got a cool name. Dracula because he is cool and a suave and he’s a freakin vampire- I love the vampires!

Horror News Network: Since you both have worked on so many shared universe titles, have you ever considered an Itty Bitty Universal Monsters title?

Art Baltazar: Yes. I would do that!

Franco Aureliani: Do you have any authority to make that happen! If you do- I’m on board!!

Horror News Network: You both recently opened your third Aw Yeah Comics store. How is the business side of selling comics for two creators?

Art Baltazar: AW YEAH COMICS! Located in beautiful downtowns, Skokie, IL , Harrison, NY, and Muncie, Indiana. It’s fun. We imagine our stores as creator owned stores. It feels almost like publishing your own comic. We have our own look and feel and vibe. The business side of things is cool. It feels like a club house where we can sell our own comics featuring our own characters ACTION CAT and ADVENTURE BUG! Our goal is to make a family friendly store where people can come in and hang out awhile.

Franco Aureliani: Awesome! We both love this industry so much much we wanted to be involved in all aspects of it. It’s been an education in retail and finding out about that side of the business. I would say it definitely makes us better creators.

Horror News Network: Along with Itty Bitty Hellboy, you have also worked on Itty Bitty Mask for Dark Horse. Any upcoming projects featuring any other titles for the company?

Art Baltazar: YES! ACTION CAT AND ADVENTURE BUG! The Mini-series coming soon! I think in March. PLUS! I created tons of characters! There is always something brewing in the world of AW YEAH COMICS!

Franco Aureliani: YES! We are talking with them about a bunch of stuff! Currently we are working on Hellboy and Aw Yeah Comics! but more stuff is coming!

Horror News Network: This one is from my ten year old daughter Diana who is working on creating her own super hero for a school project: How do you pick a name for your hero based on their powers?

Art Baltazar: Hmm. sometimes I have a name first. Then… sometimes creating the name is the trickiest thing. I usually write down a bunch of ideas until one clicks. Sometimes you may find yourself referring to the character with a nickname…which usually sticks!

Franco Aureliani: What do they do? Coming up with names is the awesome part of the process! I went through it when we had to name our son, but my wife was against the name Awesome Lad or Captain Stupendous so we just named him Nick.

Horror News Network: Thanks for answering my questions and for all you have done in giving parents an easy way to introduce their children to comics and characters they grew up with. My daughters, Diana and Lily, have sketches you did for them at conventions (and Cave Comics in Newtown, CT) hanging in their rooms as I write this.