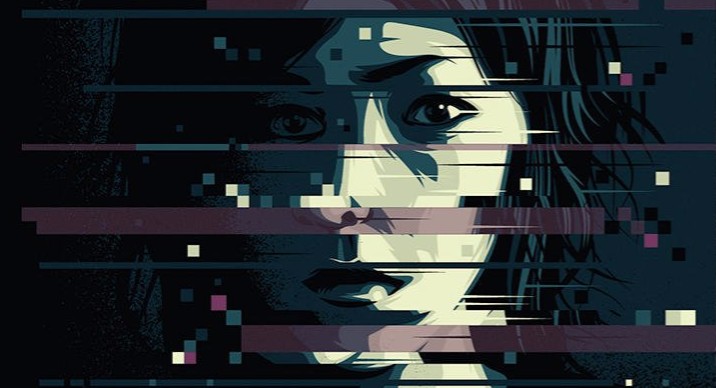 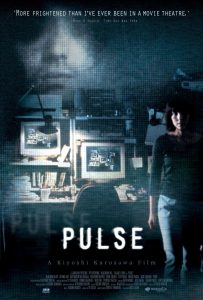 Following up on their excellent October release of Dark Water, Arrow Video continues their tradition of offering important early 2000’s J-Horror films with this month’s Pulse blu-ray and DVD set. While I find the film to be an acquired taste in comparison to some of the other popular Japanese ghost films of its time, it is highly regarded by many critics and it has withstood the test of time as evidenced by this release 16 years later. Arrow Video has cut no corners with this release; and the overall package includes a digital transfer of the film which has it looking the best it possibly can, as well as a wealth of interesting special features. The first pressing of the set will include a booklet featuring illustrations and an article by film critic Chuck Stephens. The package also features new cover art by Tommy Pocket which recalls the contemporary work many artists are doing with pop culture screen printing these days. Overall, I believe this package will be highly desirable for J-Horror fans who want to own the best possible versions of all of the classics, but this one may not be for every casual horror fan out there.

Pulse is the kind of movie that can be enjoyable so long as you don’t think too hard about it. The cinematography is interesting and it presents some seriously creepy moments. The jittery camera, the creepy movements, the stringy hair… all of the J-Horror staples which would eventually be copied ad infinitum are all here on display. Some scenes are done so well that I haven’t seen them copied as effectively to this day. However, these moments are few and far between throughout this two hour movie, and they don’t always connect to form an overall coherent idea. That may seem fine at first- not all horror movies need to be a thinking person’s movie- but the movie takes every opportunity it gets to hit the viewer over the head with pseudo-philosophical ponderings about the meaning of life, loneliness, and death. Pulse invites you to think hard and dig deeper; but the deeper you get, the more you realize that all of the tropes just don’t quite connect that well. Every one of Pulse‘s neat concepts- the nefarious dial-up internet, the red tape, the forbidden room, the ghostly computer program, the stained walls, the missing people-would all be better served in their very own movies. Pulse is an ambitious film, featuring more characters and storylines than two or three regular horror flicks put together. Sometimes this pays off, as director Kiyoshi Kurosawa clearly wanted to tell a story on an epic scale. It would have been silly for the movie to be as intimate as most ghost stories while still centering around a global phenomenon. However, some of the more intimate relationships sometimes get lost in the shuffle of the grand scale of the picture. It’s most certainly not a bad movie… it’s just that there are greater examples of classic J-Horror out there.

I’m convinced Arrow Video did the best they could with the digital transfer of the film. The restoration retains pretty good black levels and an even amount of grain throughout. Although this one was filmed by cinematographer Junichiro Hayashi (Ringu, Dark Water), Pulse ain’t much of a looker. The movie is muddy and dreary throughout; and when there is color, it is often muted. This is more of a stylistic choice than a technical one… the visual tone of the movie fits perfectly with the existential dread and contemplation of its themes and characters. Where the movie shines the best visually is during its dimly-lit ghost encounter scenes. Hayashi and Kurosawa usually keep their creatures just out of clear view while retaining a level of dreary visibility in these dark shots. This helps maintain a level of suspense throughout these kinds of scenes. The movie’s reserved score and audio effects add to the suspense, and they’re captured perfectly on the Arrow discs. As a speaker of English who had to rely on the film’s subtitles, I found the subtle voices and special effects to be particularly unsettling and effective. 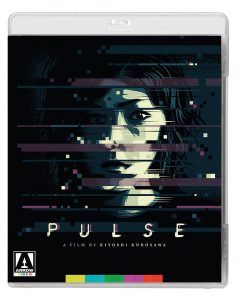 Arrow Video has become synonymous with excellent, scholastic special features, and this title is no exception to the rule. The discs are chock full of restored content from the original release of the film (such as making-of featurettes and footage from important milestones like the movie’s debut at Cannes Film Festival) and newly recorded exclusive content (including new interviews with Kurosawa and Hayashi). One feature I found interesting was “The Horror of Isolation,” a video where Adam Wingard and Simon Barrett (Blair Witch, You’re Next) discuss what they like and how they’ve been inspired by the film and the J-Horror genre. The disc features behind-the-scenes looks at how every major stunt and visual effect in the movie was created. One scene which features a character dramatically fall from a high ledge is especially effective in the movie, and I liked watching how the filmmakers were able to put together such a memorable and believable scene. Basically, this set features everything you ever wanted to know (and everything you never knew you wanted to know) about Pulse and about its creators. There’s so much to take in.

While I acknowledge that I am in the minority when I say that I was not blown away by Pulse, I maintain that this one simply isn’t for everyone. Big J-Horror fans should add this one to their collections without hesitation. Anyone else might want to give the movie a rental before deciding if it’s right for their personal library. One thing’s for sure, though, if you do end up picking this one up, you will be satisfied by Arrow Video’s painstaking presentation of the film and the supplemental materials.