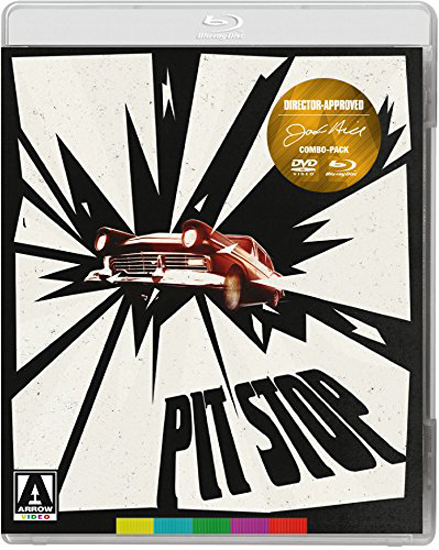 Arrow Video US to release Pit Stop on June 30th,  plus La Grande Bouffe and Blood Rage in August all via MVD Entertainment Group

The most dangerous game ever devised, to pit man against man, flesh against steel – the figure-8 race! Jack Hill (Coffy, Foxy Brown) follows up Spider Baby, once again teaming up with Sid Haig (House of 1000 Corpses) in one of his greatest roles for this action-spectacular crash-o-rama!

Richard Davalos (East of Eden) stars as Rick Bowman, a street punk who winds up in jail after a street race goes wrong. Bailed out by race promoter Grant Willard, Davalos is put in the deadly track where he comes up against Haig’s maniacal winner Hawk Sidney. Featuring an outstanding supporting cast including Brian Donlevy (The Quatermass Xperiment) in his last film appearance, Ellen Burstyn, billed as Ellen McRae (The Exorcist), and Beverly Washburn (Spider Baby), Pit Stop is one of Hill’s lesser known films but arguably his greatest.

Filmed on a real figure-8 track, Hill and his crew were able to capture gripping real-life car wreck scenes lending the film a brilliant sense of realism. You’ve never seen a motion picture like this before – can you take it?

*Crash and Burn! – Jack Hill on the making of Pit Stop

*Collector’s booklet featuring new writing on the film by critic Glenn Kenny and musicologist and writer Gray Newell on the film’s soundtrack, illustrated with original stills and artwork

The most famous film by Italian provocateur Marco Ferreri (Dillinger is Dead), La Grande bouffe was reviled on release for its perversity, decadence and attack on the bourgeoisie yet won the prestigious FIPRESCI prize after its controversial screening at the Cannes Film Festival.

Four friends, played by international superstars Marcello Mastroianni (Fellini’s 8½), Michel Piccoli (Belle de jour), Ugo Tognazzi (Barbarella) and Philippe Noiret (Zazie dans le métro) retreat to a country mansion where they determine to eat themselves to death whilst engaging in group sex with prostitutes and a local school teacher (Andréa Ferréol, The Tin Drum), who seems to be up for anything…

At once jovial and sinister, the film’s jet-black humour has a further twist as the reputed actors (whose characters use their own names) buck their respectable trend for a descent into fart-filled chaos that delivers a feast for the eyes and mind.

*The Farcical Movie – A French television profile of Marco Ferreri from 1975 in which the director discusses, among other things, the influence of Tex Avery, Luis Buñuel and Tod Browning’s Freaks

*News report from the Cannes Film Festival where La Grande bouffe caused a controversial stir, including Ferreri at the press conference

What do you get if you combine Thanksgiving, American TV star Louise Lasser (Mary Hartman, Mary Hartman), killer 80s synths and some of the most gruesome special effects in all of slasher history courtesy of Ed (Terminator 2) French. Why, it’s Blood Rage of course!

Todd and Terry seem like sweet kids – that is, until one of them takes an axe to face of a fellow patron at the local drive-in. Todd is blamed for the bloody crime and institutionalised, whilst twin brother Terry goes free. Ten years later and, as the family gathers around the table for a Thanksgiving meal, the news comes in that Todd has escaped – and he’s heading their way. But has the killer twin in fact been in their midst all along? One thing’s for sure, there WILL be blood…

Filmed in 1983 at the tail-end of the slasher golden era but not released until 1987, Blood Rage (also re-cut and released to theatres as Nightmare at Shadow Woods) has been lovingly restored from the original vault materials for its first ever appearance on Blu-ray and DVD. Happy Thankskilling!

*Optional English subtitles for the deaf and hard of hearing

*Reversible sleeve featuring original and newly-commissioned artwork from Marc Schoenbach, to be revealed

*PLUS MORE TO BE ANNOUNCED!

Arrow’s global reputation as one of the finest labels in the world has come about through consistent high quality product and a focus on fan-based products always at its core. This includes a major investment on restoring original material through modern techniques as well as pioneering packaging solutions and newly commissioned artwork for each release.