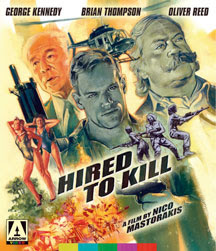 No man on earth could get him out of prison alive. Seven women will try.

Starring legendary actors Oliver Reed (Gladiator, The Brood) and George Kennedy (The Delta Force and the Naked Gun series), Hired to Kill is a hugely entertaining action flick featuring guns, girls and a plethora of budget-busting explosions for good measure.

Action movie staple Brian Thompson (whose brief turn in 1984’s The Terminator led to a starring role in the 1986 Sylvester Stallone vehicle Cobra) stars as Frank Ryan, a mercenary sent to track down a rebel leader in hostile territory. Posing as a fashion designer, he’ll be aided by a posse of beautiful – but deadly – women.

Whilst the opportunity to see Oliver Reed chewing up the scenery behind an elaborate moustache merits the price of admission alone, Hired to Kill is also noteworthy as being co-directed by Nico Mastorakis – the man behind such cult favourites as Island of Death and The Zero Boys.

Optional English subtitles for the deaf and hard of hearing

At the height of the Italian giallo boom in the early 1970s, scores of filmmakers turned their hand to crafting their own unique takes on these lurid murder-mystery thrillers. This limited edition double pack features two distinctive offerings by Emilio P. Miraglia, which meld twisty whodunit narratives with gothic chills. In The Night Evelyn Came Out of the Grave, troubled aristocrat Alan Cunningham (Anthony Steffen, Django the B*stard), haunted by the death of his first wife Evelyn, tries to move on by marrying the seductive Gladys (Marina Malfatti, All the Colours of the Dark). Marital bliss is short-lived, however, as various relatives meet untimely and gruesome deaths, prompting speculation that a vengeful Evelyn has risen from the grave… Meanwhile, in The Red Queen Kills Seven Times, an age-old family curse hits sisters Kitty (Barbara Bouchet, Milano Calibro 9) and Franziska (Marina Malfatti) following the death of their grandfather Tobias (Rudolf Schündler, The Exorcist, Suspiria). Every hundred years, so the legend goes, the bloodthirsty Red Queen returns and claims seven fresh victims. Was Tobias just the first… and are Kitty and Franziska next? With both films making their worldwide Blu-ray debuts in stunning new 2K restorations, there has never been a better time to explore these little-seen giallo gems!

THE NIGHT EVELYN CAME OUT OF THE GRAVE

The Whip and the Body – archival interview with Erika Blanc

The films of Roger Corman are often as well-known for their behind-the-scenes stories as they are the ones unfolding on the screen. He famously made Little Shop of Horrors in just two days using sets left over from A Bucket of Blood and shot The Terror over a long weekend because bad weather prevented him from playing tennis. But none of these tales is quite so complex, or quite so extraordinary, as the making of Blood Bath. The saga began when Corman invested in a Yugoslavian Krimi-like picture entitled Operation Titian just prior to it going into production. Insisting it be filmed in English, he sent actors William Campbell and Patrick Magee, and uncredited story editor Francis Ford Coppola (all fresh from Dementia 13), to Dubrovnik to make a US-friendly movie but wasn’t satisfied with the end results. First it was re-cut and re-scored to create Portrait in Terror, a film more in line with drive-in tastes, then it was handed over to Jack Hill (Spider Baby), followed by Stephanie Rothman (Terminal Island), each undertaking reshoots that resulted in a vampire picture by the name of Blood Bath. One final twist was provided when a TV version was required, chopping scenes and adding others to create Track of the Vampire. For this release Arrow Video has searched through the vaults to bring you all four versions of Blood Bath, newly restored from the best materials available to provide a definitive release of one of Corman’s craziest ventures.

High Definition Blu-ray (1080p) presentation of four versions of the film: Operation Titian, Portrait in – Terror, Blood Bath, and Track of the Vampire

Brand new 2K restorations of Portrait in Terror, Blood Bath and Track of the Vampire from original film materials

Bathing in Blood with Sid Haig – a new interview with the actor, recorded exclusively for this release

Outtakes from Track of the Vampire, scanned from original film materials