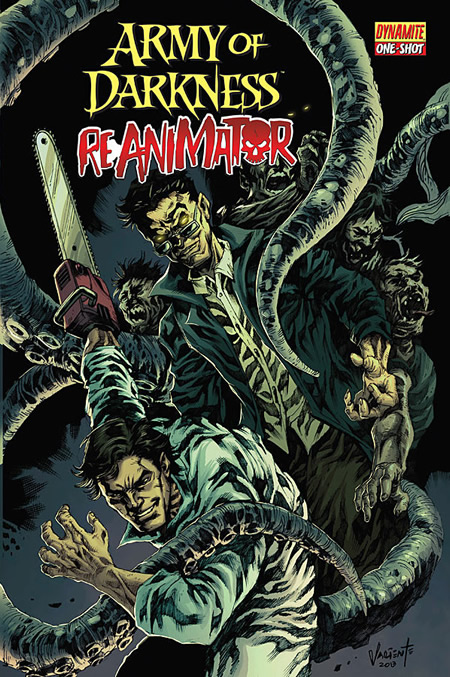 Army of Darkness/Reanimator One Shot Review

Synopsis:  Ash is hurled into an American graveyard in the 1920s and meets an intense young doctor named Herbert West. If the name sounds familiar, West’s obsessed with reanimating the dead at any cost. But he just can’t seem to find corpses that are fresh enough. If the setting isn’t, it’s H.P. Lovecraft’s New England – and his bizarre original short story as the source material. Bonus!  Also featuring a reprint of Re-Animator #0!

Our Thoughts:  It’s always fun to envision two icons of horror doing battle with one another.  There’s nothing quite like a heated debate amongst friends over what the outcome would be if a couple giants of the genre had a duel to the un-death.  Who would win in a murder match up, Chucky or the Leprechaun? Candyman or Pinhead? Well, Mark Rahner from Dynamite Entertainment not only envisions such nightmarish matchups but brings them to life in this installment of the AOD/Reanimator.

Dynamite’s Army of Darkness/REANIMATOR One-Shot is a humorous experiment gone horribly, RIGHT!  Rahner’s writing eloquently infuses Ash Williams into the necromantic world of Herbert West: The Reanimator!  This cross over is full of accurate Lovecraftian mythology that originally made the short story such an unsettling success.  This comic really has the best of both worlds: Ash Williams’s hilarious one liners and Herbert’s ridiculous resurrections.

The great this about this crossover is that you could envision these two universes colliding. The team of Rahner and Valiente certainly make that happen.  Ash’s crude and primitive persona clashes quite well Dr. West’s over educated madness.  Randy Valiente’s artwork is gorgeously entertaining and really brings to life this epic crossover of two horror icons.  Army of Darkness Re-Animator was a disgustingly enjoyable dinner that further complements itself with a reprint of Re-Animator #0 (2005) for dessert.

Dynamite continues to make nightmares come true with crossovers that until now, only occupied our most violent disagreements.  Army of Darkness: Re-Animator was an excellent clash of two of horror’s most decorated veterans and certainly pays homage to both universes equally.  Fans of either series would thoroughly enjoy this One Shot.  To see how the Deadite Destroyer fares against the Doctor of Re-Animation, pick yourself up a copy of Army of Darkness: Re-Animator.  It’s in stores now!