The folks at NECA have good news and bad news for the serious (and casual) collectors of their lifelike horror action figures.

The good news, as reported by JobLo.com, is that the company will soon roll out an eight-inch figure based on Keith David’s Frank Armitage character from John Carpenter’s 1988 cult classic They Live.

A photo of the figure with David–which can be seen on this page–was tweeted by the actor himself, who expressed his appreciation for the homage. “I never imagined a Frank Armitage action figure,” he wrote. “Now that it’s here, I love it! See the resemblance?”

The new figure–which has no exact release date yet (but sometime before Halloween would be a good guess)–will join a John Nada figure (Roddy Piper’s character in They Live), according to NECA.

They Live, as fans know, follows Nada, who discovers a pair of sunglasses that shows the world as it truly is. What he uncovers is that “most of the social elite are skull-faced aliens bent on world domination,” according to the official synopsis.

Now for the bad news. NECA announced this week it is cancelling its action figure based on Roy Scheider’s iconic Chief Martin Brody character from Steven Spielberg’s 1975 masterpiece Jaws.

This eight-inch figure–that had its debut at this year’s Toy Fair in Manhattan–will not be available to collectors, according to a tweet from NECA, “due to a licensing conflict.” Another NECA figure, this one based on Robert Shaw’s Orca skipper Quint, however, is slated for a January 2021 release, with additional Jaws figures on the drawing board. 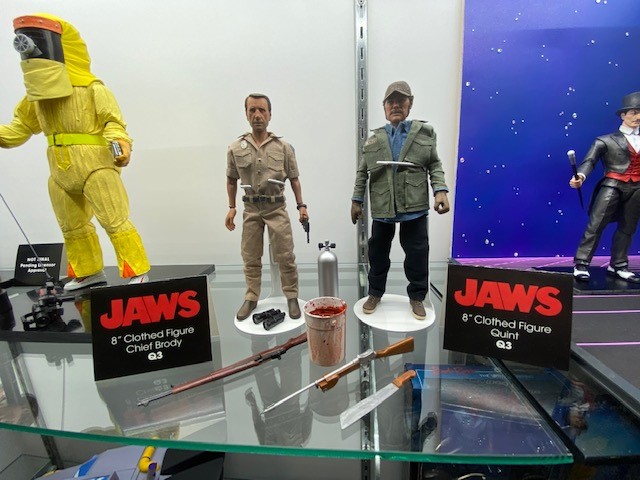 As all fans know, Jaws–the original summer blockbuster–told the story of the meanest damn shark ever, and the efforts of Brody, Quint and Matt Hooper (Richard Dreyfus) to save the inhabitants of Amity Island from ending up as hot lunches.

Keep reading Horror News Network for all the upcoming horror-themes goodies from NECA.