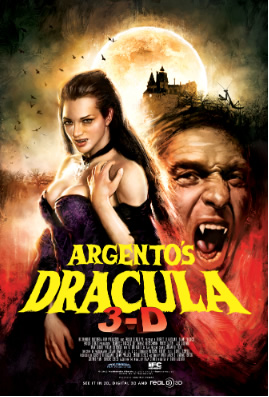 HNN is teaming up with IFC Midnight and SundanceNow in promotion of their new horror film, ARGENTO’S DRACULA 3D. One lucky person will win the poster (below), a lenticular postcard (a holographic representation of the poster), and a code to watch the film for free on SundanceNow. All you need to do to enter to win is respond to this post and be living in the USA.

ARGENTO’S DRACULA 3D is described as: Horror master Dario Argento returns with a bloody, luridly creepy 3D version of the classic vampire tale, drenched in gore and sex. An unsuspecting Englishman arrives in Transylvania, lured by a job with a local nobleman. But the undead Count Dracula’s real target is the man’s innocent young wife. Featuring the iconic Rutger Hauer as vampire hunter Van Helsing and the inimitable Asia Argento (the director’s own daughter) as a local all-too-eager to fall under the Count’s sway.