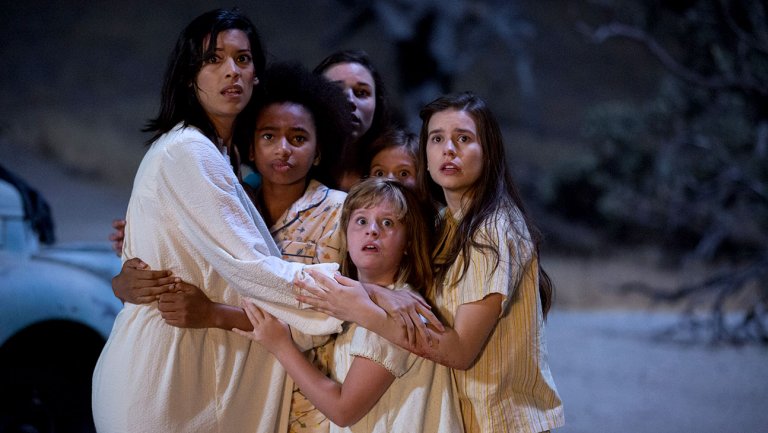 The first Annabelle film, a spin-off from the critically and financially successful The Conjuring, is an interesting case study.  Like its source material, the first Annabelle film raked in the dough, with $84 million domestically and an unbelievable $257 million worldwide (I guess creepy dolls is the second international language).  Unlike the Conjuring however, the film took a beating on Rotten Tomatoes (finishing up with a score of 29%) and while fans showed up in droves initially, the audience quickly tailed off in the States, and the negative buzz did not bode well for a sequel to the film. In spite of this, Annabelle: Creation is a surprisingly entertaining film that has much more in common with first Conjuring film than its predecessor or last year’s sequel to the Conjuring.

If you didn’t see the original Annabelle (like me), no worries. The set-up follows the simple pattern established in the original Conjuring and most classic tales about ghosts and haunted houses, yet the creativity exhibited by director David F. Sandberg (Lights Out) makes the scenes seem fresh and oddly familiar (in a good way).  There are multiple scenes in the film where a less creative director would have used CGI to “enhance” scenes.  Thankfully, Sandberg is working with traditional effects through the majority of the film and it pays off with legitimate scares and eye-pleasing scenes.

One of the most difficult effects to get right is the use of the doll itself.  If the porcelain-faced figure runs around the screen like Chucky, fans will laugh at the doll.  The subtle movements that we never actually see go a long way in establishing the demonic power of the doll, but the scenes that really scare are the ones that are just out of frame or focus that don’t pay off.  Sandberg clearly understands (as James Wan did in the original Conjuring) that delaying the scare, or even not giving the audience a scare when they expect one, will pay off later in the film and it is a great way to increase the anxiety of audiences conditioned to expect jump scare after jump scare.  Sandberg gives the audience a number of these scenes (most impressively with a simple sheet thrown over Annabelle early in the film) leading to the inevitable crescendo in the last 15 minutes of the film.

Sandberg also adeptly handles Annabelle’s various forms throughout the film. One of the criticisms of the Conjuring Two was the use of multiple (meaning too many) “creatures” that seemed disconnected from the central antagonist.  For many viewers, when “the Crooked Man” shows up, the film takes a huge dive in quality (and believability).  While Sandberg employs a variety of forms of evil (the original doll, a traditional Teutonic Devil, scarecrow, etc.) he thankfully never lets the audience forget who is “pulling the strings” and he also does this is a subtle fashion with barely visible eyes in the dark or the aforementioned out-of-focus lenses.  He also never shows us too much when it comes to “Old Scratch” himself, which made me want to get a better look at the monster, and it’s always better to leave an audience member wanting more.

Since this is a “Conjuring Universe” film, there are touches of “coming attractions” style scenes or references, but they are very brief in nature and they will both satisfy the die-hard fans and not confuse novices.  Most of the film takes place in the 1950’s on a farm house in an undetermined location, and there is a brief scene at the end of the film that connects it to the original film (for fans who like to obsess over “plot holes” I imagine).  As someone who didn’t watch the original, it didn’t concern me, but it didn’t confuse me either.  What I did love about the epilogue was the choice to incorporate and reference the actual Annabelle doll that sits behind a glass case in the Warren’s Haunted Museum.  This provided a real inside joke and recognition for long-time fans of the couple that these films are based on, and it was a clever way to both avoid a lawsuit and bring in the classic form of the reputedly possessed doll.

In a summer bereft of horror films, Annabelle: Creation is a satisfying late summer treat that should satisfy older teens and fans of classic haunted house films.