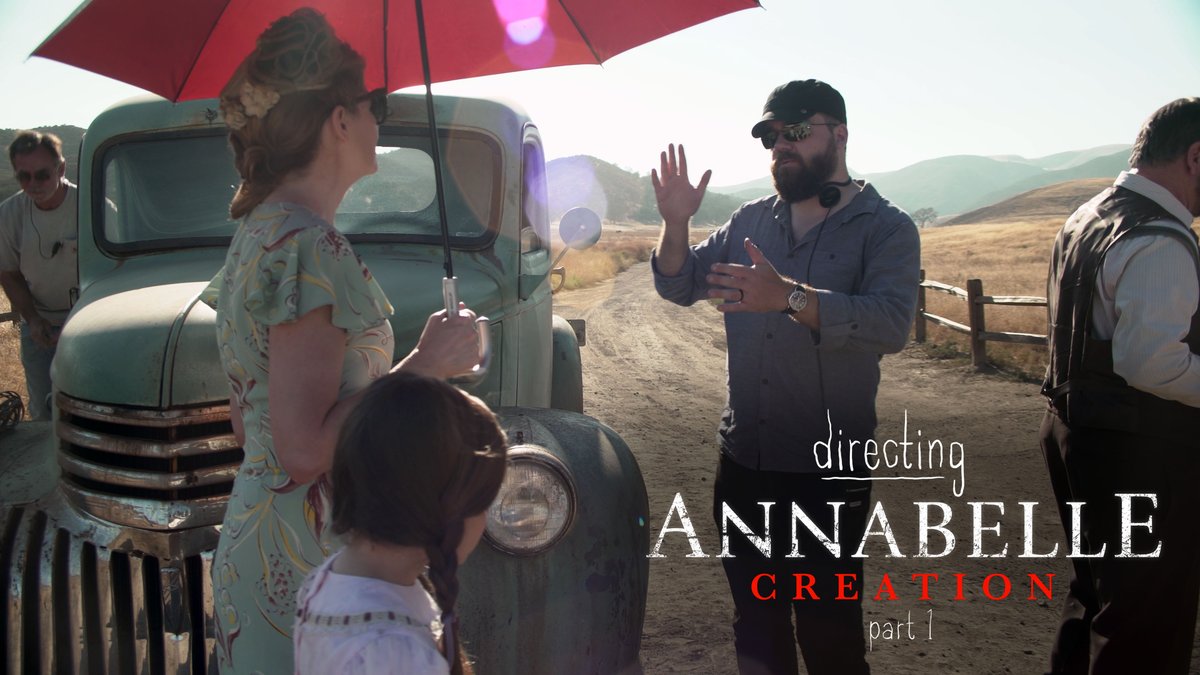 The original Conjuring spin-off Annabelle was a massive world-wide financial success (earning over $256,000,000), but was less successful with critics and fans.  When the inevitable sequel was announced, most discerning horror fans were not very interested, until director David F. Sandberg came on board the project.  Sandberg impressed many horror fans with his debut feature Lights Out which became one of the sleeper hits of the summer movie season of 2016, and it looks as if history will repeat itself this summer on August 11th when Annabelle: Creation is released.  David took some time from a busy promotional schedule to talk to us about his current film, what he learned from Lights Out, and his upcoming DC Universe film Shazam (scheduled for a 2019 release.)

Horror News Network: We are only a few days away from the highly anticipated release of your film Annabelle: Creation.  How are you feeling about the film now that is complete and ready to shown to the public?

David F. Sandberg: I feel pretty good at this point.  So far, the film has had positive reviews and a great reaction.  Annabelle: Creation just came out in Italy and it is currently number one at the box office.

HNN: You’ve worked with a number of child actors in Lights Out and Annabelle: Creation.  What is it like working with child actors on a horror film?

Sandberg:  The girls (Lulu Wilson, Talitha Bateman, Samara Lee) were so into it.  They were all so professional and had seen horror films such as The Exorcist.  Samara was named after Samara from the Ring, so she was right at home.  The only challenge in working with child actors when it comes to filming are some of the restrictions in terms of hours on the set and such but they were great to work with.

HNN: Aside from the young actors, you also worked with a number of talented veterans on Annabelle: Creation such as Miranda Otto, Anthony LaPaglia, Kerry O’Malley, etc.

Sandberg: They all made my life very easy and enabled me to focus on the technical challenges of the film.  They all required very little direction. Having actors like Miranda Otto and the others makes the film look “classy”, based on their previous work.

HNN: You were also able to work with Alicia Vela-Bailey again who portrayed Diana in Lights Out.

Sandberg: Alicia is so versatile.  Not only is she a stunt woman, but she is also a trained dancer and had incredible control of her body.  As a creature performer, she was able to contort herself and get all sorts of weird motions into her performances in Annabelle: Creation.

HNN: Like you, many of your contemporaries (Andy Muschietti, Lars Klevberg) were noticed for their work on short films.  Do you think this is an important initial step for young directors?

Sandberg:  Absolutely.  The more you create, the more you learn.  In order to get better, you have to keep creating.  Today, it is within reach for so  many people due to the technology available.  You can make short films with your phone at this point.

HNN:  Lights Out was a tremendous financial and critical success, but what did you learn from Lights Out that you applied to Annabelle: Creation?

Sandberg: For the first film (Lights Out), I planned like crazy because I knew that it was my one shot to get it right for Hollywood.  This time on Annabelle: Creation, I planned a lot less.  I did very little story boarding or shot lists and instead simplified my process and was inspired by the set and moment and it ended up working very well.

HNN: You initially worked with James Wan as your producer on Lights Out and again on Annabelle: Creation.  What is it like working with James?

Sandberg: James Wan is a master of horror.  It is amazing to think that I was watching his films and now I am working with him.  He was very involved with the script phase and in grounding it in the Conjuring Universe such as putting in references to the Nun.  Yet, the story is pretty disconnected from the first Annabelle film and you wouldn’t really need to see the first film to understand or enjoy Annabelle: Creation.  I enjoyed “the old School” feel of James’ Conjuring and I believe that the new film has the same feel.

HNN: You’ve mentioned before that you were inspired by Robert Wise’s 1963 film the Haunting when making Annabelle: Creation.

Sandberg: Yes, I love the natural feel of The Haunting and I tried to replicate that style with the longer takes and planning out scenes and the cinemascope lenses.

HNN: Can you provide any updates for us on the status of Lights Out 2?

Sandberg: We are in the early stages right now, but I expect it to ramp up now that Annabelle: Creation is finished.  We are working on the story and script at this point.

HNN: You were also recently announced as the director of DC’s Shazam.  Unlike some other heroes such as Batman and Superman, while the character is easily recognized by fans, Shazam has less recent canon and stories to work with.  Does this make it easier to approach the character and craft a story/film about him?

Sandberg:  Yes, it would be more difficult and nerve wracking to take on something like Batman which has been done many times before.  There is not as much pressure to follow a set story line with Shazam.  Shazam’s story is not as preconceived as other DC characters and even has a number of different origin stories so it allows for more freedom.  When I’ve mentioned the project to some people, they sometimes say “Isn’t that the genie movie with Shaq?”  I am very excited to work with New Line again on Shazam and I have loved working with them on Lights Out and Annabelle: Creation.

HNN: Many horror directors have recently been hired to director a number of big budget super hero films such as James Wan’s upcoming Aquaman, Scott Derrickson’s Doctor Strange, and  Jon Watts’ Spider-Man: Homecoming.  Why do you think Hollywood is hiring a number of directors who have experience in the horror genre for these blockbusters?

Sandberg:  I think it is because horror films are hard to do and get right.  There are a lot of bad horror films made, but not a lot of good ones.  When you work on a horror film, you have to be inventive and they prove  that you can fulfill a lot of different roles.  Most horror films have lower budgets and you have to be creative with how you accomplish your effects and how you adjust to difficulties.  Even with a big budget film, it helps to think creatively.