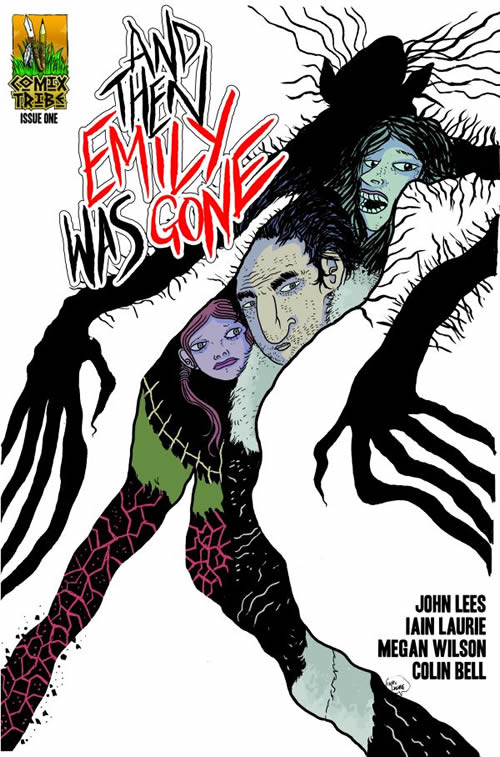 ‘And Then Emily Was Gone’ Interview With John Lees

Greg Hellinger is a man who sees monsters. A former detective driven to the brink of madness by terrifying apparitions, he is tasked with finding a missing girl named Emily. Hellinger’s search takes him to a remote community in the Scottish Orkney Islands, where strange and terrifying things are happening.

We caught up with writer, John Lees, to talk about “And Then Emily Was Gone.”

Horror News Network: How did the concept for this book come about?

John Lees:   The concept for And Then Emily Was Gone mainly came about from working with Iain Laurie.  I’ve been a fan of his artwork for years, and from Powwkipsie through to Iain Laurie’s Horror Mountain, he’s established a really distinctive style that really speaks to me as a horror fan.  He’s managed to merge this very Lynchian, ethereal dream/nightmare logic with a more visceral, skin-crawling Cronenbergian body horror, all mixed up with this rich vein of vicious, jet-black humour.  With And Then Emily Was Gone, I was very much scripting with an eye of tailoring the narrative specifically to what I, as a fan, would love to see Iain Laurie draw.  The hope is that the end result will play a bit like an “Iain Laurie’s Greatest Hits” collection, but with his unforgettable imagery transposed from the more surreal comics Iain typically does to a more structured narrative.  I like to joke that Iain and I are meeting in the middle, as it’s at once by far the most mainstream comics project he’s ever done, and by far the most weirdest and out there comic I’ve ever undertaken!

Horror News Network: Can you tell us more about the main character, Greg Hellinger?

John Lees: Greg Hellinger is something of a broken genius.  In his former life, he was a celebrated detective who operated a police taskforce for finding missing people.  As we see in issue #2, he has a unique way of thinking that gives him invaluable insight into just where people might have gone when they seemingly vanish off the face of the earth.  But 5 years ago, Hellinger had what was called a “spectacular nervous breakdown,” and ever since he has been plagued with these constant visions of horrific monstrosities that follow him around wherever he goes.  And after all these years of being left a shell of a man, believing his brilliant, infinitely creative and insightful mind has turned against him, as our story begins he’s presented with the possibility that perhaps he isn’t crazy… and the implications of that are even more frightening.

Horror News Network: What can you tell us about Emily Munro?

John Lees: Emily Munro is not someone who is much of an on-panel presence.  Though her name is in the title, so is the word “Gone.”  As our story begins, Emily has already vanished.  It’s through her best friend, Fiona Tulloch, that we learn Emily’s story.  Emily and Fiona were both born and raised in Merksay, a remote community in Scotland’s Orkney Islands.  When Fiona last saw Emily, she was terrified, having become convinced that Bonnie Shaw was after her.  Bonnie Shaw is a creature of Orkney folklore, who was said to make Faustian pacts with parents to give them their hearts’ desire in exchange for their child.  Fiona and Emily planned to run away together, but then Emily disappeared.  And so now Fiona has sought out Hellinger to seek out the truth, and find out if Bonnie Shaw is responsible for Emily’s disappearance, or if it’s the work of a more human monster.  It soon becomes apparent there is evidence to support both conclusions!

Horror News Network: What can readers expect from this book in terms of creepiness?

John Lees: I think readers can expect And Then Emily Was Gone to be sinister in ways they might not be prepared for.  This is not a comic with in-your-face monster slayings and lashings of gore – though there is the occasional explosion of grue to be found!  It’s much more insidious than that, in that the comic is designed on a structural level to make the reader uneasy.  Nothing sits quite right: the scene transitions are quite jagged and disconcerting, there are story beats that don’t seem to quite fit together the way they should, and the pages are filled with uncomfortable close-ups or shots from oppressive, unconventional angles, like you’re on a bad trip.  Iain and I have talked quite a bit about wanting to generate the atmosphere of a dream, recreating that moment where you’re in a dream and everything feels normal… but then things start to turn, and you know in your gut the dream is about to turn into a nightmare, that something horrible but currently intangible is waiting just out of your line of sight.  And with each passing issue, we want to take the reader further on that journey into nightmare, until you reach the last couple of issues and it’s hopefully just a full-blown onslaught of terror.

Horror News Network: Can you talk a bit about the creative team on the book?

John Lees: I’d be happy to!  What more can be said about Iain Laurie that I haven’t already said?  The guy is one of my favourite artists working today, and I think it’s criminal that he doesn’t have a wider audience.  If And Then Emily Was Gone achieves nothing else, it hope it gives Iain Laurie a bigger platform and exposes more people to his highly distinctive work.  Because in my opinion, to see Iain Laurie’s work is to love it… and to be nauseated by it.  I look forward to him getting lots of new fans!  Funnily enough, the book was originally intended to be black-and-white.  But then our colorist, Megan Wilson, came onboard, and has added so much to the creative team that we can’t imagine the book without her now.  She is immensely gifted, and an artist in her own right, as the palette she has used not only compliments Iain’s linework and brings out the detail, but also adds this rancid, lurid quality to the atmosphere that fits in beautifully.  And as those who work in comics will know, the letterer is often the workhorse of the team, and that much holds true for our letterer, Colin Bell.  The book is lettered beautifully, with lots of cool additional creative flourishes that Colin worked in.  And he’s also responsible for much of the book’s eye-catching design, too.  Team Emily really is an all-star grouping in my eyes, and it’s also worth adding mentions for Tyler James – publisher of ComixTribe – for handling much of the marketing and promotion for the book, and our roster of awesome guest cover artists – Riley Rossmo (Green Wake, Bedlam, Drumhellar), Nick Pitarra (The Red Wing, The Manhattan Projects), Garry Brown, (The Massive, Iron Patriot) and Joe Mulvey (Scam).  Some bona fide comic art superstars who have added their gravitas to the project.  Each issue has a 50/50 variant cover – one by Iain, and one by a guest artist – with Riley Rossmo’s cover up first for issue #1.

Horror News Network: In closing, what would you like to tell our readers about this book?

John Lees: First off, and most important: the order number!  MAY141251!  That’s the number your local comic shop will need to order this comic.  It’s in this month’s Previews catalogue, page 334, which comic shop retailers all over the world use to order their comic stock.  If you are interested in checking this book out, let your retailer know now, to give them time to order it in.  I cannot stress that enough: comics, especially indie comics, thrive on pre-orders.  I really hope you check us out.  I think fans of horror will find a lot to like about And Then Emily Was Gone.  There are nods and homages to some iconic horror, but there’s also a suitable streak of originality to make this feel like something new as well.  I’m a lifelong horror fan, and this is me trying to tell the kind of story that would scare me.  Horror comics are going through a real resurgence at the moment – so much so I’ve taken to calling these coming months “the summer of horror” with all the high-profile debuts on the slate – so if you like horror and you like comics, now’s the time to dive in.  And Then Emily Was Gone #1 hits comic shops on 30th July, with the five-issue series releasing monthly after that.

Horror News Network: Thank you for your time, John. We wish you continued success with this book!