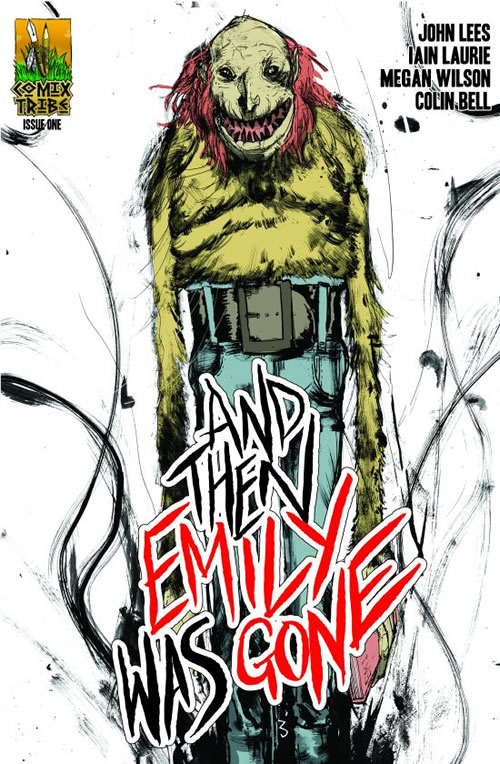 And Then Emily Was Gone #1 Review

Synopsis:  Greg Hellinger is a man who sees monsters. A former detective driven to the brink of madness by terrifying apparitions, he is tasked with finding a missing girl named Emily. Hellinger’s search takes him to a remote community in the Scottish Orkney Islands, where strange and terrifying things are happening. Features a variant cover by artist Riley Rossmo (Bedlam, Drumheller).

Our Thoughts:  What do you get when you mix Scottish Folklore with heavy doses of LSD?  You get a menacingly mysterious comic book with the name “And Then Emily Was Gone”.  This urban legend-like mystery on acid oozes originality and creates an oddly comforting vibe with each nauseating panel.  I say comforting mainly because of where the artwork took me.  Iain Laurie’s work in “And Then Emily Was Gone” is unsettling perfection.  The abstract artistry within this comic reminded me of the animated shorts you would see on MTV’s early 90’s show “Liquid Television”   Some of these penciled panels almost seem to have been drawn by a homicidal version of Mike Judge.  The nostalgia I received from the artwork within “And Then Emily Was Gone” puts me right back in my parents living room at the age of 10 with the same exhilarating feeling I would get while watching something mom and dad deemed inappropriate, and for good reason.  The story within “And Then Emily Was Gone” is as compelling as the artwork.  John Lees’ writing forms an almost hypnotic trance over the reader that is akin to the inability some people face to look away from severe automobile accidents.  The “Merksay Stories” excerpt entitled “Fisherman Bill” at the end of the issue was an enjoyable bonus and really added lore and substance to John Lees demented little world.

There is such a brilliant balance of myth, horror and mystery in issue #1 of “And Then Emily Was Gone”, it is truly a prime example of why I love checking out obscure indie horror books.  This comic has a rare uniqueness that is hard to come by in today’s mainstream and has me anxious to dig in to issue #2. Get to your local shop and pre-order “And Then Emily Was Gone”, it comes out July 30th and in my opinion as a horror comic fan, should not be missed.