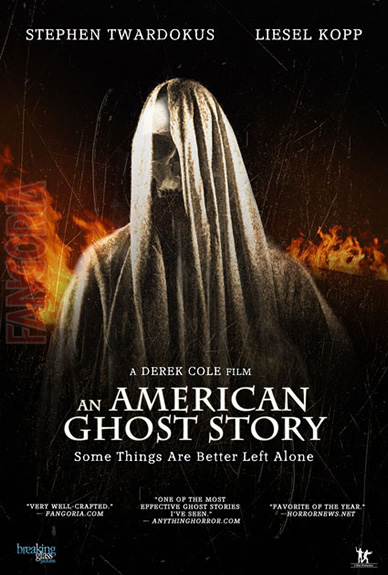 Synopsis:
Paul and his girlfriend Stella move into a supposedly haunted house. Hoping that the house will provide him with material for a book, Paul’s initial excitement of encountering the paranormal turns to terror as his obsession with the house threatens his sanity.

Our Thoughts:
The haunted house movie has become the dominant horror film of the last ten years. Is this a reflection of the economic downturn and destabilization of the housing market over the last decade, anxieties over equity and mortgages sublimated into ghosts and demonic possessions as the ultimate property value killer? An American Ghost Story focuses on Paul, an author looking to write a book about a murdered family and moves into the house where the killings occurred, recreating their living conditions in order to activate the ghostly activity at the crime scene. While there are some well-crafted ghostly scenes (a mischievous basketball, overactive cabinets, an unseen presence in a bed) and the climax is quite suspenseful (nice to see the return of the bed sheet wearing apparition), the film borrows way too much from other movies. The shocks here should come as no surprise for those who have seen Paranormal Activity, Ju-on, The Shining, Sinister, Poltergeist, White Noise, and The Changeling. Even the title references both An American Haunting and the TV show An American Horror Story (the producers should have kept the original title of Revenant). The film could have done something interesting with Paul’s insistence on finishing his book no matter what the cost, a commentary on unemployment, the breakdown of the family, and the decline of masculinity in the early decades of the 21st century America, but it merely ends up as another postmodern mélange of horror tropes. The film offers little atmosphere, an essential component of any successful haunted house film. An American Ghost Story is competently scripted, acted, scored, and directed, but what’s the point?