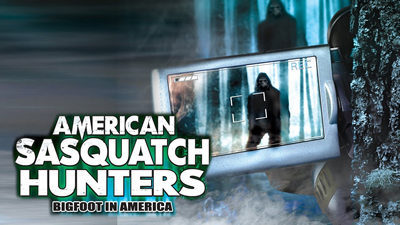 Synopsis:
Documentary focusing on the Bigfoot phenomenon and the development of new technologies and research strategies to answer the question of the creature’s existence once and for all.

Our Thoughts:
Before I start this review, I want to indulge in a bit of a rant that is in no way reflective of my feelings about this documentary. This tirade has to do with the plethora of paranormal/ghost/cryptozoology/UFO/aliens/conspiracy-hunting shows that have clogged up dozens of cable channels. Why do these researchers need to prove everything is real? Isn’t it the mystery, the enigma, the wondering that makes these phenomena so special? It as if these pseudo-scientists need to demonstrate that traditional science is wrong and close-minded, but what is the “alternative” method they use to do this? Science! It’s like when religious people use science to prove that the stories of The Bible really happened. Isn’t faith enough? Science has killed everything else; do we really need it to kill the imagination too? That’s why In Search Of… was the finest example of TV investigations into the unknown; it never tried to prove the realism or existence of any of its bizarre subjects. In Search Of … presented a range of theories with no particular preference for any of them. It was up to the viewer to decide which explanation was valid. There were no forced, over-reactions to noises, no dopey night-vision perspectives, no phony “parapsychologists” insisting that something is here when there is clearly nothing there.
OK, enough of that.

American Sasquatch Hunters: Bigfoot in America is a good, sincere introduction to the subject of Bigfoot. Though it does spend time discussing the usual Bigfoot topics such as the legitimacy of the Patterson film, Native American legends, and compelling evidence such as plaster-cast prints, the documentary moves in a different direction than the typical Sasquatch study by focusing on the Bigfoot hunters themselves: the who, how, and why of these dedicated investigators. These “Bigfoot hunters” run the gamut from academics to amateur researchers to so-called “Sasquatch detectives,” all passionate and well-spoken people whose enthusiasm is evident in their lively discussions. The film covers a host of important Bigfoot scholar issues such as their motives, their strategies, how they deal with hoaxes, the equipment they use, and the effect that technology will have on the future of Bigfoot research. Most importantly, the majority of the speakers subscribe to the anthropological theory that Bigfoot is some sort of primate or early hominid. I would have liked more in-depth discussions of alternate Sasquatch theories, ones that explore mystical, supernatural, or extraterrestrial origins, but it seems that this documentary wanted to legitimize these investigators and their search in a purely scientific manner. The recreation of Bigfoot sightings and the creature itself harkens back to the 1970’s “guy in a hairy suit” type of dramatization, which takes away from the overall serious tone of the documentary, but does give a nod to the era that began the Bigfoot craze. American Sasquatch Hunters: Bigfoot in America is a short but sweet survey of the unknown and largely unsung researchers into the legend of Bigfoot.