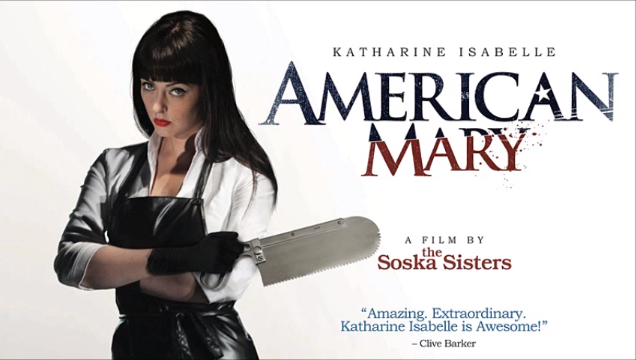 I have to tell you guys, I am on a serious roll lately; from Excision to Holliston, I’ve watched some really good horror in the last month or so. Thankfully, this streak did not end with American Mary.

American Mary is a splendidly twisted little film written and directed by Jen and Sylvia Soska of Twisted Twins Productions (Dead Hooker in a Trunk). The film stars Ginger Snaps alumni Katharine Isabelle as Mary Mason, a seemingly intelligent and gifted medical student with grand aspirations of becoming a surgeon.

Mary is running into some problems though on her quest for medical fame and glory; her professor doesn’t really seem to like her and by the sounds of a phone call she receives, neither does her schools financial department. Like any motivated girl would do, Mary looks to the help-wanted ads to see what’s what and comes across an ad for a local strip joint promising $1,000 dollars a night to give massages but no sex (bullshit). Anyway, she goes down and brings a copy of her resume with her.

There she meets Billy (played by Antonio Cupo), who runs the strip club. He quickly goes over Mary’s resume before getting down to the meat of his interview process which consists of making her disrobe and getting a quick massage. During Mary’s “interview”, club bouncer Lance interrupts to tell Billy that someone is hurt. Billy checks out the situation and, based on her resume, offers Mary a quick $5,000 if she sews up the injured individual.

This is where things start to get very interesting because working at the strip club is an odd gal named Beatress (played by Tristan Risk) who is into body modification. When I say she’s “into it”, I mean that she’ had a dozen or so surgeries to try to make herself look like a living Betty Boop. Beatress seems to have no shortage of cash as she offers “Dr. Mary” a small fortune to meet with her friend who wants to have her nipples removed and vagina smoothed over so she can look like a Barbie Doll (different strokes, ya know?).

Soon enough, Mary has the money that she needs for school but things on that front take a sudden turn for the worse as she is betrayed in a horrible way by the professors that she trusts. Mary makes a plan to take revenge on them as she also begins to take in more business as a sort of “back door” body modification doctor.

I know this all sounds crazy, and believe me it is, but it’s all done so damned well. What could have been just another revenge movie becomes so much more under the brilliant direction of the Twisted Twins and the fantastic acting of their cast. Katharine Isabelle’s portrayal of Mary as a sexy, smart and strong woman transforming from a doe-eyed medical student to…well, what she becomes is truly something to behold. Not to be overlooked is Tristan Risk’s remarkable performance as Beatress who is incredibly bizarre but so sweet that you look past her weirdness. The Twisted Twins themselves even make a fun appearance as potential patients of Dr. Mary.

I can honestly say, beyond the shadow of a doubt, that American Mary is on my very short list of the best horror films of 2012. Well done ladies, I cannot wait to see what beautiful insanity you bring us next. 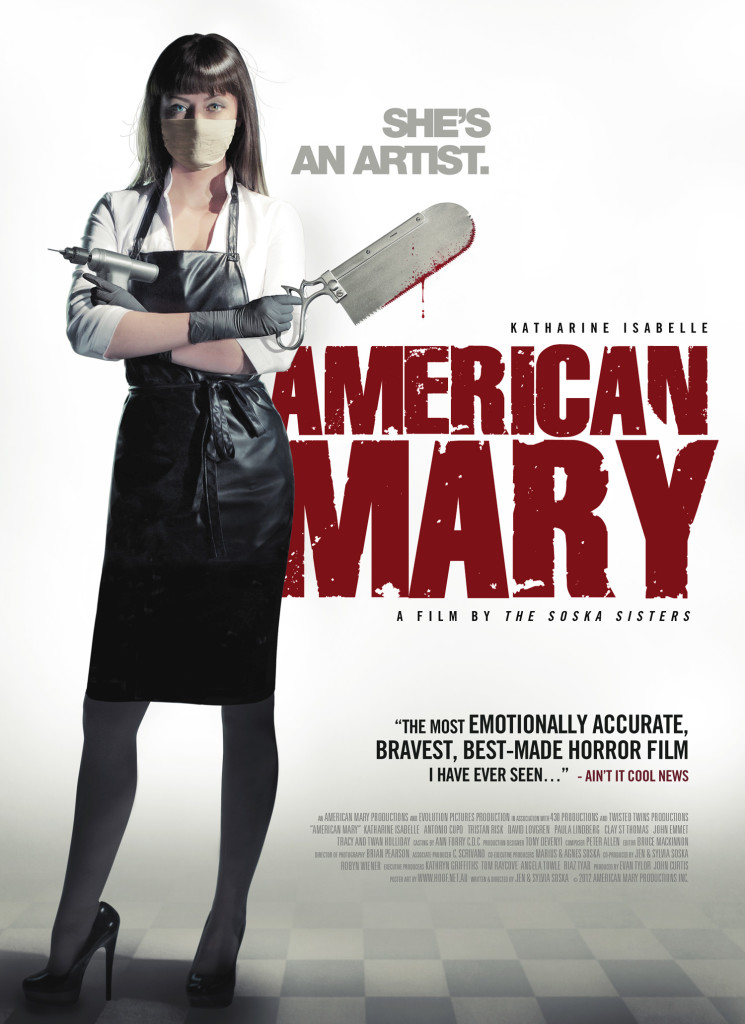