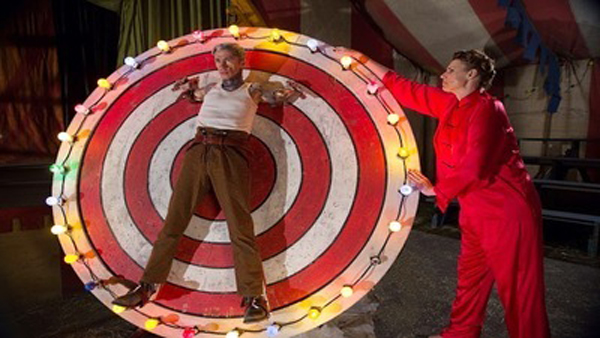 Our Thoughts: In tonight’s episode, it is revealed that, after Elsa gave them to Gloria, Dandy is in love with the Twins and desires to marry them. He says he feels normal when he is with them, and is indeed acting “normal” for the first time in the show, at least for a little while. Bette of course is happy about it, while Dot is not. By the end of the episode, we have the old Dandy back, when he finds out the truth.

Meanwhile the freaks are celebrating Elsa’s birthday, albeit being sad that the twins are gone and confused by their disappearance. Paul starts suspecting Elsa after seeing Dandy buying women’s things in twos. Elsa is getting ready for what she hopes is her big break into T.V. We also learn of a secret affair that Paul, who is sleeping with Elsa, is having with Penny.

When confronted by Paul about the possibility of being involved with the Twins disappearance, we are treated to a classic Jessica Lange performance of emotional anguish, as she accuses the freaks of being ungrateful. She forces one of them, who ends up being Paul, to prove his loyalty by getting on the bullseye so she can throw knives. Elsa shows herself to be exactly what Paul said she was. The other freaks start suspecting by the end of the episode.

Stanley and Maggie plot who to kill instead since the twins were missing. Maggie is clearly not cut out for the things Stanley wants her to do, which I think we are all happy about. However, the flash forward scenes of possible murders are horrific to watch. Finn Wittrock, who plays Dandy, stands out in this episode, with his amazing emotional breakdown toward the end of the episode. I wonder how many freaks will die in the next few episodes, between Dandy, Stanley and Elsa all having motivations to kill members of the troop. Until next week, freaks!