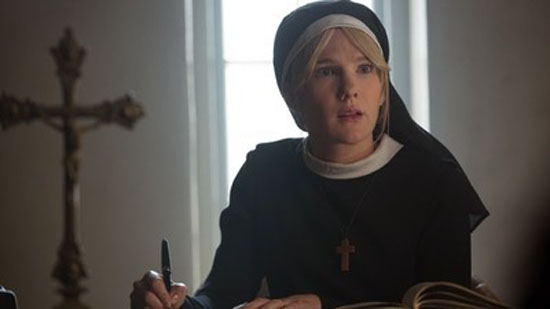 Synopsis: The death of a Freak sparks troubling behavior in Pepper. Elsa reveals the history of the Freak Show. Desiree grows suspicious of Maggie.

Our Thoughts: This week’s episode starts off on a tragic note, with Salty dying in his sleep as Pepper stayed beside him. As expected, Stanley takes his body for his own purposes. Elsa talks about the history of the Freak Show and how it all began. We finally learn more about Pepper, whose story is just as sad as you’d expect. Naomi Grossman’s performance in this episode is outstanding! She rarely gets much screen time unfortunately, so I was very happy to see her finally get more attention. Ma Petite’s death is now even sadder that we learn how close Pepper was to her. However Pepper’s love story with Salty is absolutely beautiful.

Desiree brings her new boyfriend Angus, played by Malcolm-Jamal Warner, for a psychic reading from Maggie. Maggie freaks out on them because her own love life is a mess and confesses to Desiree that she and Stanley aren’t really what they seem. Later, she brings Desiree to the Museum where the murdered freaks are on display, in order to get her to help her save the rest of them. However there is a shocking new arrival that she was unaware of.

In yet another heart breaking scene, Elsa decides to take Pepper to stay with her sister, her only living relative. Followed by the ‘Asylum’ tie in we had been waiting all season for. The way Pepper ends up in the Asylum is far darker than I imagined it would be. I think this episode may even top Edward Mordrake Part 2, Twisty’s story, on the scale of saddest episode this season. I can’t even guess at the insanity that lays ahead for the remaining two episodes. American Horror Story returns January 7th, with special guest Neil Patrick Harris, and what looks to be an absolutely insane episode! Until then, Freaks!