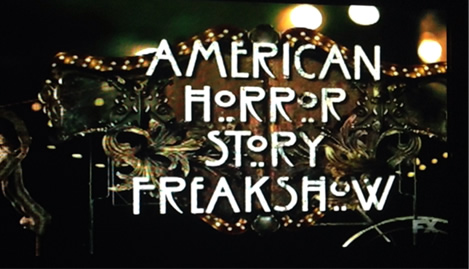 Synopsis: One of the only surviving sideshows in the country struggles to stay in business during the dawning era of television. When police make a terrifying discovery at a local farmhouse, the eccentric purveyor of the freak show sees an opportunity that will lead her troupe either to their salvation or ruin.

Our Thoughts: First of all, the new intro for this season is absolutely amazing! So far, each season’s intro has been killer, but this one goes above and beyond with amazing special effects and a lot of super creepy clowns and characters.

Season four sets a tone and atmosphere more eerie and darker than the previous, surpassing even season one and two. The music and visual effects are completely outstanding. If the season premiere is any indication, it appears as though there will be more bloodshed in Freakshow. Between the killer clown and the sideshow members themselves, who actually kill and chop up on person in this episode. Even with a 90 minute premiere we did not meet all of the new characters this season and many more are seen in the preview for next week, including returning cast members Angela Bassett and Gabourey Sidibe. For those afraid of clowns, buck up for a wild ride. The season premiere did not disappoint. I, personally, can’t wait to see more!