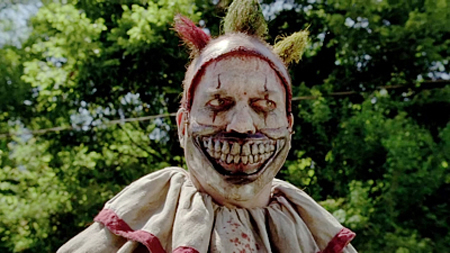 Synopsis: A citywide curfew threatens to shut down the Freak Show. A strongman from Ethel’s troubled past arrives at camp. Gloria arranges a terrifying play date for Dandy. The Tattler Twins reveal a talent that could knock Elsa from the spotlight.

Our Thoughts: **SPOILERS** This episode of American Horror Story: Freakshow starts off strong, with two murders even before the opening credits roll. Despite the Jupiter being put on a citywide curfew, Twisty the Clown continues his killing spree.

We learn more about Dandy and Gloria Mott’s dysfunctional mother-son relationship and it really is quite amusing. Desperate to entertain her bored son, Gloria employees Twisty to cheer him up, which of course backfires. My favorite, and the most disturbing scene of the episode comes when we learn the truth of Twisty’s mask, and when Dandy appears to be joining Twisty in his torturous fun-time.

More freaks join the show. Dell Toledo, “The Stupendous Strongman”, played by Michael Chiklis and his wife Desiree Toledo, played by Angela Bassett, who is a hermaphrodite.  Even though we’re only two episodes in, the writers and actors have the viewer becoming attached to the freaks and really feeling empathy for them and what they have to deal with on a daily basis. Part of this is the touch of humanity. There were some quite sad scenes when the group is treated so badly by the “normal” people and the cops.

The end of the episode wraps up in classic shocking style, with a heart wrenching scene. After all that happened this episode, I think Jimmy is going to be looking for some revenge. I am left wondering if Dandy is going to be Twisty’s sidekick now or what is happening there. Overall, American Horror Story once again leaves the viewer wanting more. I can’t wait to see what happens next week!