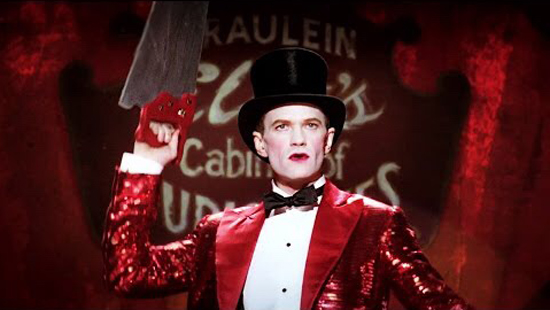 Synopsis: Elsa prepares for her move to Hollywood. The Twins grow enamored with a traveling salesman. Dell plots Jimmy’s escape from police custody.

Our Thoughts: American Horror Story returns tonight and starts off strong with the gory full story of how Jimmy lost both is hands to Stanley. Neil Patrick Harris makes his debut as a traveling salesman named Chester who joins the freak show as an opening act. He wows the freaks with his impressive magic tricks. I found his ventriloquist puppet to be particularly creepy, even before the actual creepy part. Turns out, he thinks the doll, Marjorie as he calls it, is real and talking to him. Jamie Brewer returns for the end of the season as Marjorie.

Dell and Amazon Eve bust Jimmy out of police custody, killing brutally killing some cops in the process. Meanwhile, Dandy pays a private investigator to spy on the freaks and get information on Chester.

Chester chooses the twins as his beautiful assistants for his act. They end up choosing him for their first sexual experience, however things get really weird when he includes Marjorie in the fun. Chester’s back story is very interesting and as the episode progresses, the true extent of his insanity unfolds.

Elsa sells Chester the freak show. Dandy inserts himself into the madness with for his own entertainment, encouraging Chester’s insanity. Some other truths come to light, which result in a bloody finish to the episode. Clearly, more freaks are going to die and a perfect storm is forming with Dandy, Chester and Stanley all with unique sinister motives. Neil Patrick Harris gave an amazing performance as Chester, as I think we all predicted he would, and I can’t wait to see what will happen in the remaining episodes! Until next week, freaks!