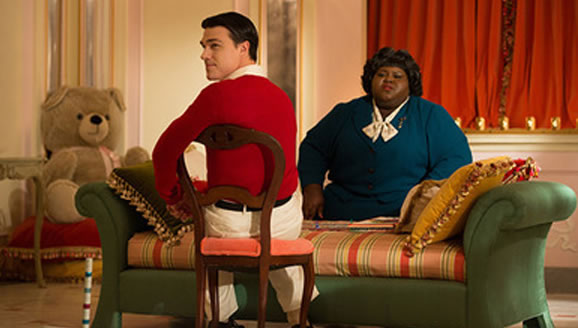 Our Thoughts: This weeks episode starts off with some more back story on Dandy’s childhood, with Gloria talking about her long held anxiety over his behavior with a psychiatrist. He was clearly a serial killer in the making since he was a kid. I’m actually surprised he wasn’t killing people sooner with the stories she tells.

The freaks believe Ma Petite is eaten by an animal after finding her bloody shredded dress. Ethel confronts Elsa over her real motivations and accuses her of murder. Elsa ends up killing Ethel in self defense and then making it look like suicide so the freaks won’t turn on her. It was shocking to see her actually physically kill one of her own, even though I think we all knew she was fully capable of it.

In a hilarious scene, the psychiatrist tests Dandy with ink blots, and it goes exactly as you’d guess it would. He then tries to make a deal with his mother to kill Regina in exchange for him to keep seeing the doctor, which of course doesn’t go over too well.

I can not believe that Elsa actually goes out to recruit a new freak right after Ethel’s death! She gets an obese woman to replace her. Meanwhile, the female freaks hatch a plan to take revenge on the men who have wronged them,going after Penny’s father first, in what ended up being my favorite scene of the episode!

In only what can be described as a holy-shit moment, we learn that Dandy’s father was his mother’s cousin. Gloria hinted in a previous episode that inbreeding was their bloodline, but it didn’t seem like it was that close to home. And in the most shocking turn of the episode, Dandy does the unspeakable and shoots his own mother. But not only does he kill her, he bathes in her blood. This episode was quite literally a blood bath, and we lost two main cast members. Rest in peace, Ethel and Gloria. At this point, I think anyone could die next. No one is safe, not even remotely. Until next week, freaks!