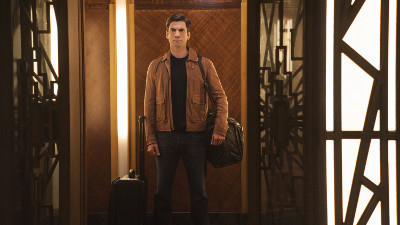 Synopsis: Detective and family man John Lowe investigates a chain of gruesome murders in Los Angeles. A mysterious tip points him to the enigmatic Hotel Cortez.

Our Thoughts: The 90 min season premiere begins with a pair of french tourists checking into the Hotel Cotez, which is has an unmistakable ‘Shining’ feel to it. Strange, blond haired children wandering around the hotel add a creepy touch. When the girls smell something foul in their room, they find that a man has been sewn inside of their bed. However the room they are moved to, room 64, ends up being far worse.

Meanwhile, Detective John Lowe (Wes Bentley) is investigating a truly horrifying murder. I found the sequence reminiscent of ‘Se7en’, with the staging of the torture and the killer’s focus on the fact that the victims were adulterers. The killer calls him and tells him to meet him at the Hotel Cortez.

A drug addict checks into the hotel is sent to room 64 and he too ends up dead, in a truly shocking scene, orchestrated by Hypodermic Sally (Sarah Paulson) and executed by the ‘Addiction Demon’ of the hotel.

The Countess and her boyfriend Donovan pick up another couple at screening of ‘Nosferatu’, followed by a sexy murder scene, in which they drink their blood. They are either vampires or believe themselves to be. Iris (Kathy Bates), who works the front desk and is mother of Donovan, appears to be a servant to her.

Proving that you never know what’s real in this hotel, it turns out Sally is actually dead, killed by Iris’s hand in 1994 after she gave drugs to her son.

This season is a bizarre blend of horror, as all ‘American Horror Story’ seasons are. This is the first season to have a detective centered storyline. I’m not a fan of Lady Gaga in general, however I like how evil her character is turning out to be this season and think she is a good addition to the AHS family. I can’t wait to see who will die next! Until next week, fellow guests of Hotel Cortez!