More than anything, American Horror Story has always had problems with pacing and the aforementioned abrupt shifts in focus, narrative, and style. How could I even get through one episode after the terror-inducing choices made by Ryan Murphy last season?  Well, I took some advice from fellow HNN staffer John Evans.  He suggested that I took a segment-by-segment approach to this review (akin to ingesting Miralax in small gulps) so I could make it to the end of the episode and track my reactions.   Here are the fruits of my labors, divided into small, bite-sized, stream-of-consciousness segments:

#1: Starts with actual footage of last year’s election.  It looks like we have Evan Peters (playing an abnormally articulate and measured racist Kai Anderson) with blue hair.  Did people with blue hair vote for Trump?

#2: Twisty the Clown (from “Freak Show”) shows ups to menace an amorous couple on a bright sunny day in the park.  It’s ironic that John Caroll Lynch plays the killer in this scene which is ripped straight from David Fincher’s Zodiac (the irony is that Lynch also appeared in Zodiac which was a competent film, unlike, you know..).  I liked the homage to EC Comics in this scene, albeit a brief one.  Allison Pill (who plays Sarah Paulson’s character’s wife Ivy) has an incredibly round face.  Kai shows up at a town council meeting and delivers a very coherent speech about “choosing fear over freedom” which seems to argue against his agenda.  He ends his failed speech to the council over building a Jewish Community Center by saying that “there is nothing more dangerous than a humiliated man”.  Tell me about it…

Ally’s fear of clowns crops up again for some reason after Trump wins the election (she also terrified of a piece of coral in her doctor’s office).  A nightmarish scene takes place afterwards in a generic supermarket (Whole Foods wasn’t available?).  Clowns are running amok! Commercial break.

#3: Ally and Ivy (really?) own a restaurant called Butchery on Main.  Business isn’t booming.  Marriage problems exist over the fact that Ally voted for Jill Stein.  Kai shows up and spills a drink on the couple, you know, because he doesn’t like them.  Critics love to create meaning in the absence of meaning.  I thought this was supposed to be “biting satire”? None so far…Ally and Ivy hire a new nanny who looks like a reject from a Tim Burton casting call (Billie Lourd). 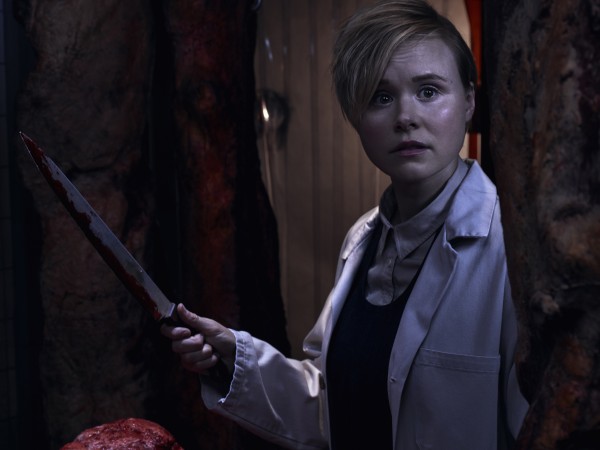 #4: Kai Anderson is the racist Michael Myers.  He shows up everywhere just in time to provoke or disturb.  In this scene he throws a “balloon” filled with urine at a group of migrant workers who, naturally, beat the blue dye out of his hair.  Fear not though, it’s a set-up, and someone got it on tape! There have been at least three zoom-out shots when Ally freaks out and sees clowns.  One would have been sufficient, but this is American Horror Story after all.  Is she afraid of clowns because It comes out on Friday?  We do get to see an extended preview during the break, which is also kind of ironic.  It’s the closest we get to it in the context of the show (aside from John Caroll Lynch showing up, see above).

So far, the main emotion I am feeling is boredom.  Usually there is some set-up before the nonsense starts, but at this point I don’t know or care why the main character is afraid of clowns.  Some critics have gone so far as to explain away the lack of direction by saying that it’s supposed to replicate the mood of Post-election America.  Maybe Murphy should hire these writers to actually work some subtext into Cult,  because they are doing a fine job of writing their own story.

#5: Almost there…big murder across the street.  Clowns in an ice cream truck are the main suspects.  Ally and Ivy also have a child (that looks a lot like Evan Peters actually).  I didn’t mention him before.  I don’t really care about him either.  Is there a three “f-word” limit on FX?  We just hit the quota.

Coming attractions show the rise of cult leader Kai and some more stereotypical looking Nazi followers.  Some of the footage also looks like it was borrowed from Saw 2; maybe this is Murphy hedging his bets in case Jigsaw is a hit so he doesn’t have to go back and add it later?

Well, that about does it.  I think I’ll give it one or two more episodes to see “where it goes”, but honestly, I will most likely “elect” to stop watching this show.  Hey, I can always read some of the positive reviews to see what I missed (and what Murphy forgot to include in this “trumped-up” allegory).

Ryan Murphy--creator of the FX mega-hit anthology American Horror Story--sure knows how to tease the fans of his show as it approaches its 10th...
Read more