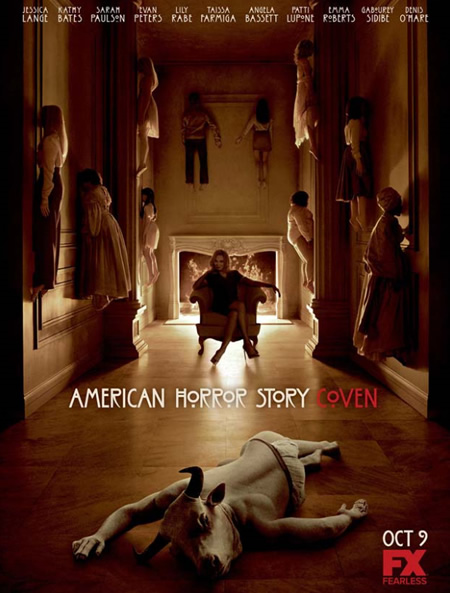 American Horror Story: Coven, the third installment of the FX miniseries, came to a close last night with a new Supreme being named after thirteen episodes of debauchery, graphic mutilations, backstabbing and plenty of murder and reanimation that would make H.P. Lovecraft proud. Executive producers and co-creators Ryan Murphy and Brad Falchuk have said that the two major themes running through Coven are feminism (even though all of the female characters are at each other’s throats, literally and figuratively) and racism. The cast itself reads like a Who’s Who of exciting female actresses: Jessica Lange, Angela Bassett, Kathy Bates, Frances Conroy, Sarah Paulson, Gabourey Sidibe, Emma Roberts, Patti LuPone, Jamie Brewer, Lily Rabe and Taissa Farmiga.

The story centers around a small group of modern-day witches struggling to hold on to tradition and community while living under the constant threat of extinction from Voodoo rivals, the Delphi witch-hunting corporation and the bible-thumping, paranoid civilian masses–although infighting proves to be even more dangerous. A newly opened school in New Orleans, Miss Robichaux’s Academy for Exceptional Young Ladies, headed by Cordelia (Paulson) is created to teach the few young witches that still exist how to keep their culture alive and, more importantly, protect themselves.

Fiona, Cordelia’s mother, played by Jessica Lange, is the current Supreme who has been MIA from both the witch community and her daughter’s life. She reappears and with her arrival brings the war of the witches. The plot now centers around the rivalry between the witches of Salem and the Voodoo practitioners of New Orleans, as well as an old-timey grudge between Voodoo queen Marie Laveau (Bassett) and affluent, slave serial killer Delphine LaLaurie (Bates). As Fiona’s reign as Supreme is coming to an end due to a cancer diagnosis (Wait…witches can’t cure their own cancer?), the students climb over each other to rise to the top trying to show that they possess the Seven Wonders needed the take over the Coven: telekinesis, concilium, transmutation, divination, vitalum vitalis, decensum and pyrokenisis. Episode 13 brings the final showdown and one-by-one, the young witches begin to drop. Cordelia realizes (with the help of the Head of the Witches Council, Myrtle Snow, played by Conroy), that because of her tumultuous relationship with her mother, she prematurely ruled herself out as Supreme. In the end, Cordelia breezes through the Seven Wonders and takes her place as the leader with a new vision (Get it? Vision? Cordelia is blinded twice in the season, FYI.) to revive and protect her sisters in witchcraft. Adding an air of absurdity, she does an interview with the media to invite exceptional (but completely ostracized) young women from around the world to apply to the school as a teaser for an upcoming news story, “Up Next: Liza Minnelli talks about her hip” runs along the bottom of the screen. A sea of young women, clad in all black, line up outside of the school, giving a nod to the strength-in-numbers future of the Coven.

Stand-out performances include: Jessica Lange as Fiona Goode the Supreme struggling to hold on to her title at all costs whilst fighting with the realization that she is more human that she can handle. Frances Conroy (taking her fashion cue from Grace Coddington, former model and the creative director of American Vogue) as Myrtle Snow, who takes no shit and keeps the Coven in line. FYI, Conroy is best known as Ruth Fisher on HBO’s Six Feet Under. Angela Bassett as Marie Laveaux makes Voodoo look both terrifying and sexy at the same time. And Kathy Bates plays the horrifyingly sadistic, racist, serial killer Delphine LaLaurie, a character based on a real-life person Marie Delphine LaLaurie, a socialite from New Orleans in the 1830s infamous for the torture, mutilation and murder of dozens of slaves. Her atrocities were discovered when a 70-year old female slave chained to the kitchen stove tried to commit suicide by starting a fire at the Royal Street mansion and rescuers discovered bound and mutilated slaves. Coven producers seem to channel Ruggero Deodato when recreating some of the cringe-worthy torture scenes between Delphine and her many victims. White witch Stevie Nicks plays herself in episodes 10 and 13 as the Coven tries to lure the ethereal gypsy witch Misty Day (Rabe) into their fold. FYI, Rabe is only one of five actors that have appeared in all three seasons of AHS.

Even through all of the history-laden rivalries, torture scenes, demons (Papa Legba!!!), constant streams of murder, ritualistic baby sacrifices and cool displays of witchcraft power there are still the infamous AHS one-liners sprinkled throughout each episode that fans of the series have come to love.