AMC Network announced today via an official press release that Jared Harris has been cast in the lead role of their upcoming horror series The Terror.

Harris (who is best known for his work on Mad Men and the Crown) will step into the role of Francis Crozier, Captain of the HMS Terror and second in command of the  mysterious expedition.  Joel Stillerman, president of original programming and development for AMC and SundanceTV, praised the choice saying that “The story of man’s battle with nature and an unknown predator makes The Terror a gripping and imaginative series, and calls for a special kind of actor.” 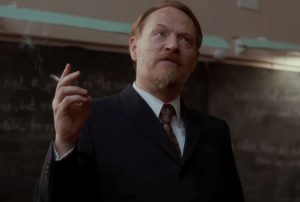 The series is based on the bestselling novel by Dan Simmons which is part historical fiction and part arctic expedition gone wrong due to some very unexpected circumstances.

The production will begin this winter in Budapest with the 10 one-hour episodes set to premiere sometime in 2017.   Stay tuned to the Horror News Network for frequent updates on this new series.