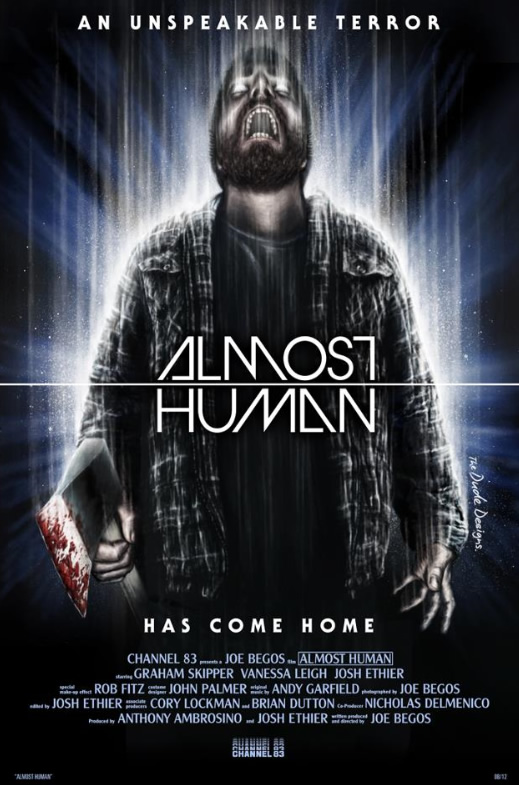 Aliens, sex, alien sex and other gruesome goings-on are the can’t-miss ingredients for chilling fun in the truly out-there shocker ALMOST HUMAN. The IFC Films theatrical release arrives on fully packed Blu-ray and DVD from IFC Midnight and MPI Media Group on June 17, 2014, with SRPs, respectively, of $29.98 and $24.98.

Two years ago, Mark Fisher (Josh Ethier, Contracted, Scavengers) disappeared from his home in rural Maine in a brilliant flash of otherworldly blue light. His friend Seth Hampton (Graham Skipper, upcoming in Dementia) was the last to see him alive. Now, Seth is having disturbing premonitions that Mark has returned as something other than human. When grisly, violent murders start taking place in the community, Seth and his girlfriend Jen Craven (Vanessa Leigh, The Last Halloween) discover that Mark is indeed back, and that there is something terribly evil inside of him.

Debuting director Joe Begos’ unbearably tense ALMOST HUMAN is a chilling, frenetic and brutal story of survival in the face of unknown terror. Scott Weinberg of FEARnet proclaimed that the film “feels like a ‘throwback’ that’s not a ripoff, and a mild satire that clearly loves the stuff it’s poking fun at.” The New York Times’ Jeannette Catsoulis said the 1980s-set film “projects a blue-collar earthiness that meshes well with its roughened visuals. … [Mark’s] preferred mating method is a loathsome hoot.” “A hybrid alien abduction/slasher film that embodies everything awesome about horror in the 1980s – gooey practical effects and all,” raved Matt Donato of We Got This Covered.

ALMOST HUMAN, an Official Selection at the Toronto International Film Festival, comes packed with special features on Blu-ray and DVD, including commentaries, a full-length making-of feature, a look behind the scenes and theatrical trailer.