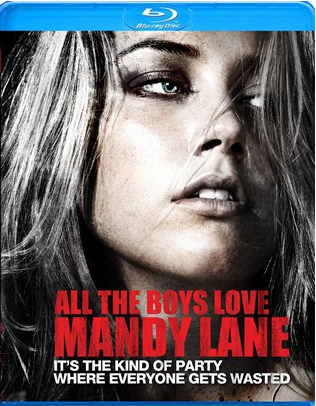 Anchor Bay Entertainment and RADiUS-TWC announced today the Blu-ray and DVD release of Jonathan Levine’s (Warm Bodies, 50/50) directorial debut, ALL THE BOYS LOVE MANDY LANE.  A story about a teenage beauty’s getaway weekend gone wrong, the film stars Amber Heard (Machete Kills) in her first leading role, along with Anson Mount (“Hell On Wheels”), Whitney Able (Monsters), and Michael Welch (The Twilight Saga).  Part slasher, part coming-of-age film, ALL THE BOYS LOVE MANDY LANE heads to retail on December 3, 2013 for an SRP of $29.99 for the Blu-ray and $24.98 for the DVD.

Amber Heard (Machete Kills) stars as Mandy Lane, an untouchable Texas high-school beauty who is invited by her classmates to a weekend getaway at a secluded ranch.  But, as the sun goes down and the party rages on, the festivities take a disturbing turn. And for lovely Mandy Lane, a night of endless horror has just begun.  Anson Mount (“Hell On Wheels”), Whitney Able (Monsters), and Michael Welch (The Twilight Saga) co-star in this acclaimed and controversial shocker from director Jonathan Levine (Warm Bodies).