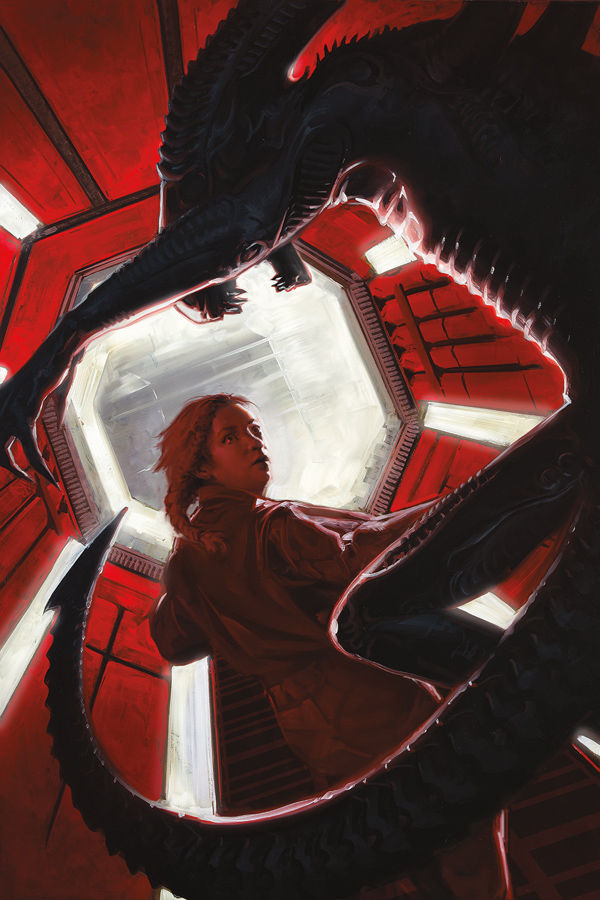 During a vicious xenomorph outbreak, terraforming engineer Derrick Russell leads a desperate group of survivors onto a rickety mining vessel. They hope to escape the creatures overrunning their colony – but they’ll face horrors both in space and on the strange planet they crash on. Ties in with the Prometheus and Aliens films!

We caught up with writer, Chris Roberson to talk about the upcoming series, Aliens: Fire and Stone.

Horror News Network: How did you get involved in writing this Aliens series?

Chris Roberson: The simple answer is that Scott Allie called me up and asked me! I’ve known Scott socially for a while, and have always wanted to work with him and Dark Horse on something fun, so of course I said yes immediately.


Horror News Network: Can you talk a bit about the first time you saw a movie in the Alien franchise and the impact that it had on you?

Chris Roberson: I was born in 1970, and saw the first Alien film at far too young an age on cable television. Scared me senseless! But I was so captivated by the characters and their world, which felt so real. These were real people I could believe in, living in a ship that felt like it had been truly lived in. And the xenomorph, of course, was both terrifying and beautiful at the same time. I was hooked!


Horror News Network: In the original film there was only one xenomorph and the fear that the creature caused was uncanny. Can you talk a bit about the horror elements in this book?

Chris Roberson: In many ways we’re going back to the “haunted house” feel of the original film. It was one of the first things that Scott and I discussed when I came on the project, the desire to get away from the military vibe that was introduced into the franchise with the second film and onwards, and back to the “ordinary people in peril” approach of the first installment. I love the movie ALIENS and clocked a lot of hours playing as a Colonial Marine in the AVP2 PC game years ago. But those were capable men and women who had been trained for combat and dangerous situations. We wanted to get back to the mindset of regular, everyday civilians who find themselves faced with this inescapable horror.


Horror News Network: What can you tell us about the character “Derrick Russell?”

Chris Roberson: Russell is one of our central characters, and the one whose voice we “hear” in the narrative captions. He is a terraforming engineer, trained in the sciences, who finds himself in a hostile environment with a myriad of dangers, not least of which is an infestation of xenomorphs.

Horror News Network: What makes “Derrick” a great focal character for you to write?

Chris Roberson: Russell is driven as much or more by his innate curiosity as he is by his survival instinct, and so he has a very different reaction to everything going on around him that the other people he’s with.


Horror News Network: How will Aliens: Fire and Stone story fit into this new Dark Horse Universe with Prometheus and Predator?

Chris Roberson: ALIENS: FIRE AND STONE almost serves as a prequel or prologue to the other books, in that it takes place some years before the others. My artistic collaborator Patric Reynolds and I get to set up a lot of the situations and environment that the other creative teams will be exploring.


Horror News Network: In closing, what would you like to say to our readers about Aliens: Fire and Stone.

Chris Roberson: This project is an immense amount of fun to work on. Patric and I both are enormous fans of the Aliens films, and we’re doing our best to deliver a story that other fans will enjoy!

Horror News Network: Thanks for your time, Chris! Best of luck with this title.