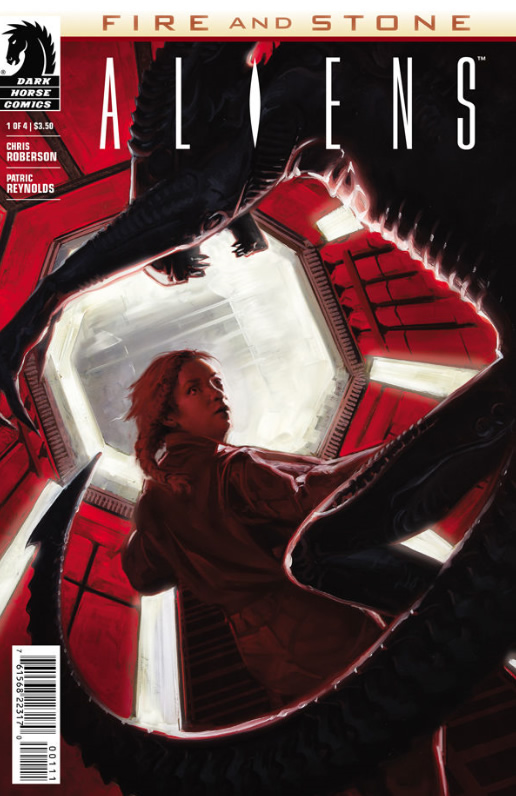 Synopsis: During a vicious xenomorph outbreak, terraforming engineer Derrick Russell leads a desperate group of survivors onto a rickety mining vessel. They hope to escape the creatures overrunning their colony—but they’ll face horrors both in space and on the strange planet they crash on. Ties in with the Prometheus and Aliens films!

Our Thoughts: This prequel sequel prequel (taking place after the Prometheus film, but before the Prometheus tie-in comic, and long before the Alien films) answers several questions about the Aliens, primarily ‘how do they keep getting everywhere?’ The answers may not surprise you, but there’s plenty of action to make up for that. We’re introduced to the characters, and see how each of them reacts to having monstrous chest-bursting horrors in their general vicinity.

The dialogue feels forced some of the time. Occasionally it’s not clear who’s speaking, and there are a few non-sequiturs. Most of the time the characters have clear voices, setting themselves aside from the cannon fodder of some previous stories.

The art is as bleak as the surface of LV-426. Reynolds uses a minimalistic style, excellently capturing the desolation of the distant moons, and the horror on the faces of the dying. This style works best with open spaces (particularly outer space). Human faces are incredibly realistic and expressive, which occasionally actually detracts from the rest of the scene. It’s not always completely clear what’s going on in the panels, but overall action moves smoothly.

The Aliens look as they are supposed to: terrifying, deadly, and adaptable. They’re vicious killing machines…most of the time. In a few panels, instead of sticking to the shadows or striking when least expected the Aliens leap across the landscape like herds of predatory gazelles.

Overall, Aliens: Fire and Stone #1 is a completely respectable set up for the next stage in the Alien saga. It may not be chest-bursting excitement all of the time, but it’s a solid first issue.