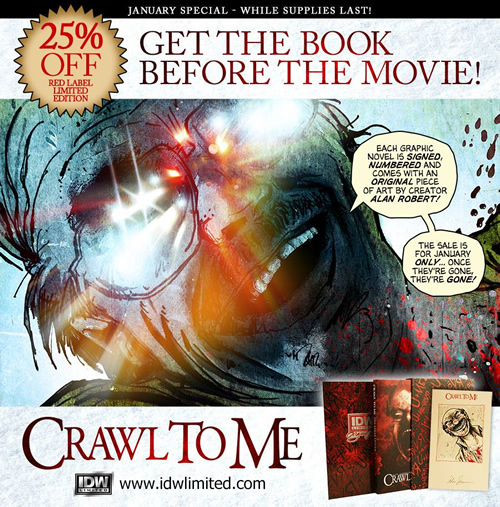 Horror News Network: First off, I want to ask about “Crawl to Me” the

movie. How’s it coming along? And what is it like seeing your creation

being brought to life on film?

Alan Robert: The whole idea of adapting the comic to the big screen is

really exciting. I’m a producer on the film and have been very involved in

all of the creative decisions. It has been great collaborating with my

Jeff Mazzola (Descent), and everyone at Rodar Y Rodar (The Orphanage),

along with director Victor Garcia (Gallows Hill) and screenwriters TJ

July, and since then we have been fine-tuning the script with the help of

the director’s input in order to get the pacing just right. Don’t get me

wrong, the script was great to begin with – and stays very true to the

source material, but now with the adjustments we made it is that much

better. It is just incredible now and I couldn’t be happier. So now that we

have a solid script in place, we have been figuring out all of the

technical aspects of the shoot with our visual effects supervisor, Glenn

Allen of Brainstorm Digital (Boardwalk Empire), and deciding on the best

approach for some of the more dynamic and challenging visual sequences.

The next step will be going out to actors and locking in talent. We’ve been

that regard. They have responded greatly to the script, which is very

encouraging. Especially since these people read tons of material everyday

and have casted some of my favorite films. They really see the potential

for the project, which is awesome. We have a short list of actors in mind

for the lead roles – it certainly is an exciting time!

In fact, IDW is running a great promotion right now for fans who want to

get the book before the movie! During the month of January, they are

Me.’ This is a top-shelf hardcover that comes signed, numbered, and

includes original, one-of-a-kind artwork done by me. There are only limited

Horror News Network: How involved are you in the filming process, as far as

Alan Robert: I’m involved in pretty much every creative aspect of the

project, which is a lot of fun for me. We have a great team on board who

all share the same vision, so it’s a pleasure to work with them on this.

There are lots of inspiring ideas to bounce around. And even though the

actual process of getting the film made is long, you know, the decisions

that stays true to the original story. Which is key, I think. We hope to

Horror News Network: Is there any casting news you are able to share at

this point in time?

Alan Robert: I wish! It’s a bit too early to share anything just yet.

Horror News Network: You obviously have a successful music career with Life

of Agony.  Has your experience in the music industry help you navigate both

the world of comics and film as far as the business and logistics of it all?

Alan Robert: Absolutely! I’ve been working in the entertainment business

for over two decades as a musician and songwriter, and I acted as the point

person for the band when dealing with managers, record labels, lawyers, and

booking agents all throughout that time. That experience definitely shaped

me and prepared me for the comics industry, and now with developing films.

If you think about it, it’s utilizing the same skill-set. It basically has

a lot to do with keeping open communication, dealing with creative people,

staying organized, and the ability to collaborate with groups in order to

get stuff done. Finding the right people you can depend on is the most

important, people that share your passion for the project. You can’t do it

Even though I’m writing, illustrating, and lettering my own books, I found

a great home at IDW Publishing. Those guys give me the creative freedom to

do my own thing, and to tell the stories I want to tell. They get the books

promotions and whatnot. It’s an easy and fantastic partnership. Same goes

for my producing partners on the film. Everyone is excited to connect the

dots to get this film made. Every producer on this project has carried

balance each other out in order to get the project closer to completion.

Horror News Network: So in your quest to conquer the comic industry, you

have “The Shunned One” coming in 2014 centers around the Angel of Death.

Tell us a bit about the inspiration and thought process behind this one?

Alan Robert: Ahh… ‘The Shunned One’, my new baby! Inspiration for this

those random shootings in Aurora and Newtown. All of those innocent lives

taken for no reason. So young. Just senseless violence. For what? Jesus.

It’s just absolutely heartbreaking. As a father, myself, it’s unthinkable.

The pain those families are going through…

That was the inspiration, though. I took those feelings I had bottled up

a bigger reason than what we see and experience everyday. I created a

supernatural system that has been in place since the dawn of man. In the

book, a divine plan is carried out by guardian and death angels who

regulate human souls. The death angels take the souls according to a

preordained order. ‘The Shunned One’ story arc follows what happens when

that balance is rocked by a death angel who goes rogue, as he begins to

take lives according to his own agenda. This isn’t a religious book, by any

means. It’s more of a supernatural story that is grounded in an urban

setting, and built up around complex characters, both humans and angels.

It is an interesting subject to me, mostly because there are so many

injustices in this world. If good people actually got to live longer as a

reward for their good deeds, life would make a hell of a lot more sense to

me. But as we all know, many innocent people succumb to sickness or even

death everyday, just as randomly as people who commit heinous acts live on

and on. It appears as if there is no rhyme or reason behind it. Just

imagine if karma was real and precise, and there was a high power enforcing

it. These are the ideas that keep me up at night!

Horror News Network: This one promises to be a pretty grim and deep story.

Alan Robert: Definitely. This is a very personal story for me on a few

levels. One being that my cousin was recently diagnosed with brain cancer

and is fighting for her life. She is only 50 years old with two young

children. My wife and I help out as much as we can. But it makes you

question why someone like Charles Manson gets to live to a ripe old age,

this horrible disease. As people, we try to reassure ourselves that it must

be a part of some bigger picture that we just don’t understand. But at the

end of the day, it just completely sucks to watch someone you love suffer

through something like this, especially long before their time. ‘The

Horror News Network: From the promo images released so far, the artwork

looks killer.  Did you once again change up the style a bit to match the

feel of the story?

Alan Robert: Thank you! That’s exactly the stage I’m at right now. I am

creating the style guide for the series. As with all of my previous books,

‘The Shunned One’ will have its own art style and direction. I put a lot of

work into creating the right tone for each story. Once I nail that down, I

get into to actual page layouts and all that. There’s a lot of preparation

that goes into it…character designs, figuring out color palettes, location

Horror News Network: When can fans expect “The Shunned One” in their hands?

Alan Robert: I am crackin’ away at it right now. I’d love to see it ready

for a Halloween release.

Horror News Network: Thanks Alan!  Expecting great things from you in 2014

Alan Robert: Thank you and huge thanks for nominating ‘Killogy’ for a

shout out to all the fans for signing up and voting! Happy New Year!