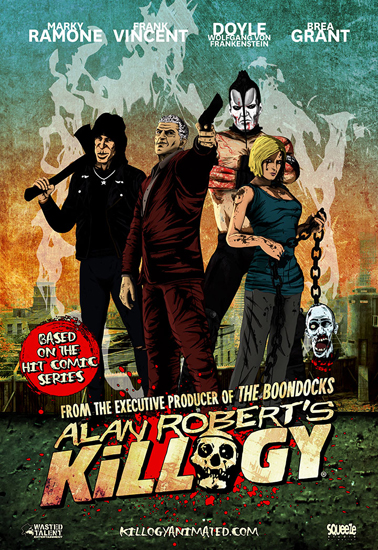 An animated series of the comic series ‘Killogy’ has been announced and a teaser trailer has been released.  ‘Killogy’ from Alan Robert, Life of Agony bassist, has been a popular comic-book mini series since 2012, with it’s mix of dark humor, bloody violence and strange celebrity cast.  The story centers around three accused murderers who could pass for look alikes of actor Frank Vincent (Raging Bull, Goodfellas, The Sopranos), Marky Ramone (The Ramones) and actress Brea Grant (Heroes), and takes place during a zombie apocalypse.  Doyle Wolfgang Von Frankenstein, ex-Misfits guitarist, along with it’s stars, are allowing use of their likenesses and contributing their voice-acting to the animated series.

At the time of the comic’s release Robert said “I had specific ideas on what these characters should look like and I’d constantly find myself comparing them to the stars we ended up approaching. When I was growing up, I must’ve seen Goodfellas and Raging Bull about 40 times each, easy.  I mean, I can still recite entire scenes by heart. The same goes for my old Ramones records. They are total classics to me. So now, to be working with some of my childhood heroes, it’s a great honor and at the same time, it’s a bit surreal.”

Vincent said When I was approached to lend my likeness to a comic book, I didn’t know what that meant, but it was a big thrill for me. And now voicing [Vincent’s character] Sally Sno-Cones in the 3D animation, it’s amazing. I feel like Superman!”

Marky Ramone commented “If anyone can survive an ocean of blood and an army of possessed monsters, it’s a drummer from Brooklyn!”

Wasted Talent Entertainment is producing the animated series in association with Squeeze Studio Animation, along with Rodney Barnes.  A release date has not been given yet, however you can follow killogyanimated.com for updates. You can view the teaser trailer here.